An accurate portrayal of Romany Gypsies from Channel 4 at last? 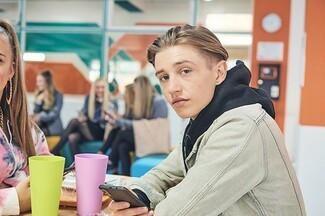 It's been just over a year since Channel 4 aired Dispatches: The Truth About Traveller Crime, the show which led to over 7300 complaints being made to the TV regulator Ofcom on the grounds of racism and discrimination, and they are already jumping into the deep end by introducing a Romany Gypsy as a main character in their drama set in a Yorkshire secondary school, Ackley Bridge, the fourth season of which aired Monday 19th April at 6pm, with all episodes available to watch on All4.

Johnny Cooper and his family are Romany Gypsies and are first seen pulling into the grounds of Ackley Bridge College, with Johnny riding his horse. Immediately, there are prejudices against their presence, however these are quickly corrected by Johnny, who points out that under several acts, the Romany Gypsies have a right to settle on the school grounds without being forcibly removed as their permanent site has been closed.

Ackley Bridge, named for the area which it is set in as well as the school which features in it, was originally about two schools merging; one school had been exclusively for the Pakistani children, and the other for the non-Pakistanis. The first three seasons were brilliant, and showed the difficulties of children from different backgrounds coming together in order to form a cohesive learning environment, as well as showing that racist views can be overcome with some education. Additionally, there was a lot of family and friendship drama, which helped to keep things interesting! The fourth season saw three new main characters; two Pakistani characters, Fizza and Kayla, and then Johnny, who very quickly became a love interest for both girls.

As soon as I realised what Channel 4 and the production company were trying to do with Johnny, I was apprehensive. After watching Dispatches, I had been very angry at Channel 4, and had no doubt that they would make another whopping fail at showing the good side to a community which is portrayed negatively in almost every show made about them…

But within the first ten minutes of episode one, I was proved wrong. Perhaps having Johnny ride into the grounds of Ackley Bridge College on horseback was not necessary, but the fact that he recited several acts and laws which meant that he and his family had a right to stop on school property was, I believe, genius.

Despite the fact that these laws might soon change due to a bill currently going through parliament, one has to bear in mind that this season of Ackley Bridge was originally supposed to be aired in September 2020, and so is ever so slightly outdated. I hope that Johnny’s recital of the facts will go towards educating the audiences in front of their TV screens who complain about unauthorised encampments of Gypsies, Roma and Travellers - Channel 4’s delivery of the law here was incredibly important and done in a way that I thought was very good because it was quick and to the point, and something which would undoubtedly be picked up on by the audience.

In the season, Johnny also struggles with juggling his responsibilities at home and to his family with the life that he has outside of that; at school, with his non-Gypsy ‘Gorja’ friends, and to music, which appears to be a passion of his.

Moreover, I was also very shocked to witness an on-screen version of a Romany Gypsy funeral which I thought had been both filmed and acted out very respectfully and in line with the rituals and practices of the culture of Romany Gypsies.

Following my recent article on the rites of funerals for Gypsies and Travellers, it was pleasing, if not slightly jarring, to see the funeral taking place. A funeral for a Gypsy, Roma or Traveller is a deeply personal time, and I feel that the actors, the crew and the writers did an incredible job on the filming and acting of this particular scene… It felt almost wrong to watch something which appeared to be so personal. The portrayal of the occasion was not racist at all, and I commend Channel 4 on what I see as an accurate representation of the last rites of our community.

Of course, it would not be a TV drama if there were not some prejudices within it, however the prejudices were always quickly corrected by characters who had more knowledge on what Johnny and/or his family were doing, or prejudices were corrected later on in the season. In addition, apologies were given and wrongs were righted, and those who had been racist accepted that their actions and words were wrong. This was amazing to see, and I compared this to the racism which the Pakistani characters received in the earlier seasons before they were integrated into the Ackley Bridge College community.

In my opinion, it seems that Channel 4 may be trying to make amends for previous fails and that is something which I think every media outlet should do when pulled up on their racism. Channel 4, I feel, have given as accurate and unbiased a portrayal of the life of Romany Gypsies as they can, and have done their best to honour our traditions as in the case of the funeral, and have tried to correct some prejudices and stereotypes which exist towards us in society.

Ten-part drama Ackley Bridge begins on Monday 19th April at 6pm on Channel 4, with new episodes each weeknight. It is also be available for free on the All 4 app.