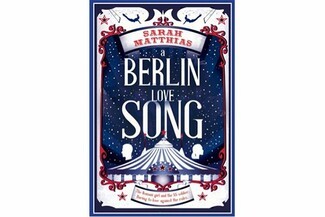 Isabelle Smith reviews ‘A Berlin Love Song’ by Sarah Matthias and finds the story of a Romani family and a young love affair in Germany during World War Two ‘a compelling tale of horror, hope and heartache’.

Set at a time that Roma were deprived of their rights and property and were prohibited to marry “Aryans”, or even each other, A Berlin love song tells the story of a forbidden love between blue-eyed boy Max Hartmann, a member of Hitler Youth, and Romani girl Lili Petalo, a trapeze artist from the famous Petalo Circus. As their love blossomed, war raged across Europe.

From the very beginning we learn that Lilli did not escape death at the hands of the Nazi regime, however though I knew her life would come to an abrupt ending nothing prepared me for the horror and heart-wrenching way this fiery and courageous Romani women had to brutally die. Though she did not leave this life without a legacy of which I will leave you to learn for yourselves.

Lilli and Max’s relationship did not appear an equal one in terms of sacrifice and risk and the lovers’ worlds could not be further apart. Despite Max being Lilli’s Knight of Wands I grew to resent him until near the very end of this story. My only disapproval was the way I felt Lili was slightly oversexualized from the reference to her clothing on her and Max’s first meeting to the intimate kiss she initiated on the second meeting many years later and the question of what became of another character in the book called Marko?

These small issues aside, as the story unfolds, we see the build-up of Hitler’s Third Reich and the mechanisms and methods of social engineering that were used, from members of Hitler Youth being told to promote the organization by attaching banners to their bicycles to the beermats and Christmas ball balls with Hitler’s face on. The conditions provide insight in to how a resistant and headstrong Max becomes a dedicated member of Hitler Youth and later an SS soldier.

Like many Romani families at the time, the travelling Petalo family were deported to Auschwitz-Birkenau.to the “Gypsy camp” where malnutrition, health epidemics, medical experiments, forced sterilization and forced labour were rife. Despite this, the Petalo family remained strong and full of hope especially Pa - Lilli’s dad.

This story put the flesh on the bones of the estimated half a million to a million Roma and Sinti murdered by Hitler’s regime by telling the reader the story of just a few individuals that makes up this chilling and unimaginable statistic. Each of the victims had story and a family that mourned their loss if they were lucky enough to survive.

We know it is difficult to give a specific number of Roma victims as many were murdered by mobile SS groups, on sight, or reached the gas chambers without ever being registered officially, however A Berlin Love story could have easily been the story of any one of the Roma and Sinti murdered during World War Two.

I was captivated and finished the book in just three sittings and enjoyed the way the Romani language was incorporated throughout the book and felt so compelled to keep turning the pages. A tale of horror, hope and heartache. A must-read, I give it 10/10.

Read about author Sarah Matthias research for ‘A Berlin love song’ on her website here.