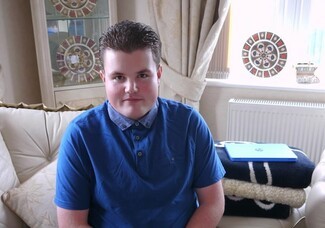 Jason Smith is a young Romany Gypsy who was born profoundly deaf. Here he tells The Travellers’ Times about how he came to hear and his wish to help other Gypsies and Travellers affected by deafness.

My name is Jason smith, I was born profoundly deaf, and I want to share my story to raise awareness of deafness and Cochlear implants within the Romani and Traveller community.

At one time my world was complete silence. I was unable to speak, hear or talk. I would throw tantrums and get upset and frustrated trying to make sense of the world. I was taken to the doctors and they suggested hearing aids in the hope it might improve my hearing and help me to learn to speak.

“I couldn’t explain that the sounds were hurting my ears”

I remember the day I got my hearing aids. The audiologist put them in my ears and turned them on. A piercing whistling noise went through my ear-drums. I hated them and frantically pulled them out and threw them at the wall. The audiologist lady stood shocked. I couldn’t explain that the sounds were hurting my ears. The noise was overwhelming but not clear. My parents preserved for months trying to make me wear them, but when their backs were turned the hearing aids would come out.

They were so disappointed they had hoped that they would help me to learn to speak. They were told by the doctors that apart from hearing aids, there was little else that could be done for me in Wales at that time.

We were completely nomadic in my younger years and travelled around Wales. My father would go out to work earning a living as a landscape gardener and my mother would stay at home looking after us. One night, as my father sat watching the TV switching through the channels, one program caught his attention. It was a documentary about children having cochlear implants, which are a implanted electronic hearing device embedded in the skull designed to produce hearing for a person with severe to profound deafness by electrically stimulating nerves inside the ear.

It sparked hope in my parents that this could be what they were looking for to give me hearing. At this point little did they know that the same surgeon they saw carry out the operation on the TV would be the one to carry out mine.

I was given various examination and assessments over a one and a half year period to make sure I was compatible and it was finally agreed that I could have the implant. However we were warned that this operation would not come without risks, which could include brain damage, injury to facial nerves or meningitis. There was also no guarantee that this high risk operation would even be a success at giving me hearing.

My parents were terrified but determined to try everything that it took to help me hear and learn how to speak. The operation would take place at Birmingham Children’s Hospital.

At this point my parents made the decision to settle and stop travelling so we could have a permanent address for hospital letters and my recovery. There were no pitches available on sites close to the hospital and we had no choice but to move into a house until we could find a small piece of land to call our home and put our trailers on.

I remember the day of the operation. My mother was told I was not allowed to eat anything but all I could think of as a child before major surgery was food - I was starving! My parents waited anxiously in the waiting room for four hours while the operation was underway. I woke up in a dark room I touched my head and felt a bandage around it and pain in my ear.

After a couple months passed and I had properly healed we returned to Birmingham Children’s hospital. The doctor unravelled my bandage making sure my right ear was still intact. The audiologist put the device on my right ear and attached the magnet to the side of my head and switched it on. I jumped. I could hear people breathing, the tap of computer keys and the buzzing of the hospital. I was amazed. That day was the first time I ever heard the English language and my parent’s voices. They were so relieved after being so worried that after me going through all this. I remember the sound of the car’s engine as we reversed out of the car park and the tweeting of birds - the sounds people take for granted every day.

The operation changed my life completely it gave me the ability to hear. I had to learn how to talk and listen from scratch, like a baby would naturally from birth. I had to have extensive speech therapy in and outside school and I was always encouraged to talk rather than use sign language. I have had my implant 17 years now, and can clearly speak, and this is thanks to my parents taking the risk to go ahead with the operation. There is no guarantee for how long the implant will last, forever I hope, but I have saved my other ear just in case!

I have heard stories about some Travelling families who are concerned with the high risks of the operation and not letting their children have cochlear implants until they were married. However I cannot imagine how difficult it would be to learn to talk from scratch as a young adult and would recommend any parent of a deaf child who is considering this option to have it at a young age.

I feel in the middle I am not part of any Gadje deaf community and do not know of any Deaf Traveller support groups .I have never met another deaf Traveller, only heard stories, so if you are deaf and reading this, please get in touch with me on Facebook. I am trying to set up a network and have created a Facebook page Romany and Traveller Deaf Alliance.

“deafness is not a visible thing people can see”

I have had a few goes at different businesses including a burger van, but the language barrier was sometimes difficult when lots of people were talking at the same time and of course deafness is not a visible thing people can see. I worked in a scrap yard for a while but realized that my implant wasn’t working properly so I took it off and found loads of tiny bits of metal attached to the magnet and decided working in the scrap business was not for me. At the moment I take evening classes at my local college to train to be a British sign language interpreter. I am also on the executive committee for the Advisory Council for the education of Romani and other Travellers.

Many people from my community find it difficult to get access to the right support and information for their children in terms of education and health, so I hope to work to increase awareness about Romani and Travellers deafness and the multiple barriers that we experience in society.

This article was first published in the November 2016 edition of The Travellers’ Times Magazine. If you want to be put on the mailing list for The TT Magazine and sent a free copy of the next edition in May 2017, then contact our office at The Rural Media Company on 01432 344 039 or email Travellerstimes@ruralmedia.co.uk

Jason has since made a film about his experiences to find out more visit: https://www.travellerstimes.org.uk/ytt/features/hotchi-tts-lisa-smith-and-her-brother-jason-make-short-film-ch4