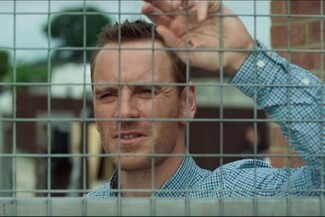 The controversial film ‘Trespass Against Us’ (U15) starring Michael Fassbender – said to be a depiction of a Traveller family - was recently shown at Borderlines Film Festival 2017 to an audience of Romany Gypsies, Travellers and settled people. The screening, which took place in Hereford, was followed by a debate on the depiction of Travellers in film and TV media – lead by the TT’s ‘Editor at Large’ Damian Le Bas.

Romani writer and filmmaker, Damian Le Bas introduced the screening of Trespass Against Us on Wednesday 1 March, and hosted the discussion afterwards…. Writes Jane Jackson, Chair of the Board, Borderlines Film Festival.

Damian felt that the filmmakers had gone out of their way not to identify the main characters as Travellers, Gypsies or Romani, despite using real Romani language and other cultural indications such as their mannerisms and jewellery in the film. This was probably a deliberate attempt by the filmmakers to prevent people criticising the film on its depiction of Travellers. Since TV series My Big Fat Gypsy Wedding and its many spin-offs, the media/film depiction of Travellers has become an uncomfortable experience for many Travellers themselves, fearing the worst excesses of stereotyping or just plain untruth.

Damian was convinced that Trespass Against Us was based on a BBC documentary from 14 years ago about a Gloucestershire Traveller family, the Johnsons, who were well known for “being pretty wild”. They had been severely mistreated by the authorities, which was where their mentality to strike back came from. Without this context, the behaviour of the family in Trespass Against Us didn’t really make any sense, though it did have some elements of truth about Traveller life as it was still lived 30 years ago.

Have a listen to the discussion here: