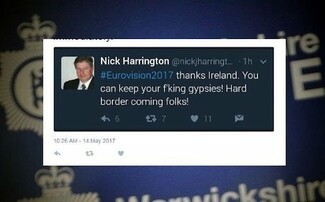 You have probably seen this weekend the Conservative Councillor and Nick Harrington tweeted “#Eurovision2017 Thanks Ireland, You can keep your f’ing gypsies ! Hard brexit coming”  in response to Ireland giving Britain nil points.  This in itself is shocking in one sentence he managed to insult the country of Ireland, Gypsies and Travellers. I found that on the same evening that Cllr Harrington had retweeted a vicious tweet about Mogadishu and a picture of the black Labour MP Diane Abbott. He did hastily remove the tweet and his social media accounts but it got me interested in looking at Cllr Harrington.

When I started to look further in to the matter, I saw this was not the first time that he had posted racism. Cllr Harrington had the image above posted on his  Facebook page from September 2016 where he likened a black scarecrow he had displayed, apparently made for a competition, to British Olympian and Gold medal holder, Christine Ohuruogu. The former Olympic and World 400m Champion was unimpressed. She shared the image with her 64,000 followers and it has been shared almost 5,400 times with hundreds of people condemning it as “Racist”.

Cllr Harrington has been elected by the residents of Stoneleigh and Cubbington ward and was therefore a Councillor of Warwick District Council. The Councillor has also been suspended indefinitely from Warwick District Council’s Conservative group. The leader of Warwick district council Cllr Andrew Mobbs said “Nick Harrington has been suspended, pending an investigation for unacceptable behavior. An advisory committee will then consider whether a conduct investigation is required.” However former Cllr Harrington now appears to have jumped before he was pushed and three days ago told the Coventry Telegraph that he was stepping away from politics.

I was then shocked to discover that he was also a magistrate. Does this not throw into doubt any cases he has sat on with a Gypsy and Traveller defendant?

A spokesperson for the Judicial Office said magistrates are required by the terms of their declaration and undertaking to inform their bench chairman and justices' clerk if they are subject to an investigation by the police.  “Mr Harrington resigned and will no longer sit as a magistrate,” they said.

(Image caption: Screenshots of the app made by Ambay Software)

Ambay Software design and publish mobile Apps for the UK, European & USA Legal sector and provide training support. When I looked in to this it dawned on me that former Cllr Harrington in fact is Director of the company that supplies an app that contains the sentencing guidelines and fine structures for courts, solicitors and the legal industry.

When we start to look at the unfair massive over representations of Gypsies, Travellers, and other Black Minority Ethnic people in the judicial system could this sentencing structure app be part of the problem? Who knows what algorithms have been built in to it? It could all be perfectly legal, but it is arguably immoral. How can someone who is meant to be impartial and fair and who helps supply the British justice system with sentencing apps have this opinion of a whole ethnicity? How can someone in the position he is speak freely on social media about it?  Furthermore, how can a person whose financial business is part of how sentencing is worked in British courts, be able to be a magistrate? Again – probably perfectly legal but morally? Surely that cannot be right, a magistrate learning his trade from the inside to sell a range of products back to other judges and magistrates?

Ambay is supplying these apps to Canada, Germany, USA and many more judicial systems. I can see on google play store that it has been bought over 1000 times. So we can assume that judges across the world are making decisions based on an app that’s designed and marketed by someone who sees no problem with posting his racist thoughts on social media for the world to see. Does this mean that there could be bias in the legal system sentencing guidance to Gypsies and Travellers? Or anyone else former Cllr Harrington decides to tweet about them based purely on their ethnicity. Is this part of what ‘institutional racism’ looks like?

I have made a complaint to the Ministry of Justice, I know that he is no longer a magistrate but I have enquired as to how many magistrates and judges use this app that is endorsed by the Magistrates Association.

This is written and maintained by a third-party company Ambay Software Ltd which does not have any commercial relationship with the Magistrates' Association. The App website is www.sentencingguidelines.co.uk.

From the 1 February 2015, the App purchase price is £24.99. To maintain judicial information the App additionally requires an annual subscription at a cost of £24.99

There are many, many add on’s available within the app. Ranging from £5-£25.

Warwickshire Police Chief Inspector Faz Chishty said; "A man from Leamington Spa has been interviewed voluntarily in regard to this complaint. This matter is ongoing and enquiries are continuing."

Our children in schools bear the brunt of racism whenever a public figure releases prejudicial statements about Gypsies and Travellers in the media. Young Romany Gypsy campaigner and star of Gypsy Kids Ben Bennett commented to me today: “Every time someone expresses hatred and prejudice towards my community, I will stand up and challenge it with education. I am disgusted with the way many people who are viewed as pillars of society, choose to use their position to spread hate”

I was happy to see that former Cllr Harrington has sent a grovelling letter of apology to Ben.  We are grateful for that, but it is too little, too late. He should be issuing an apology via the national media (it was reported in the Coventry Telegraph) and through the Conservative Party. Any sensible business man would make sure there is damage limitation. Former Cllr Harrington makes his living selling the systems to the courts across the world to determine sentencing. That is a frightening thought. We do not know just how much former Cllr Harrington pockets for his apps as his annual accounts for Ambay software Ltd are ‘small’ accounts and his turnover is not listed at Companies House.

My concern is about how apologetic he actually is? I will be watching this as it unfolds. I will keep you all updated on how the Ministry of Justice and the police act on my complaints.