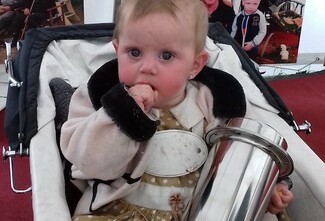 This year at Lee Gap Fair, Leeds GATE and Gypsyville took something extra special along that was going to planted at some point in the near future and that planted that would bear its fruit in a quarter of a centuries from when it was planted. It was a time capsule – a metal container that would be filled with objects and messages from Gypsies and Travellers today and then buried. It would remain deep in the ground until it was dug up 25 years from now and its fruit would be a glimpse of life from the past! Gypsyville’s Amanda Read reports on Lee Gap Fair, singing and storytelling, a time capsule – and a laughing policeman.

The heavens opened as soon as we set off from our home in Pontefract for Lee Gap fair. We were not put off though and by the time we arrived the downpour had stopped. We soon found a good spot in the bottom field and pulled up near the Leeds GATE tent. The GATE team where busy setting up and Claire, a Leeds GATE worker, had the kettle on and was already preparing the stew for later in the evening.

I walked around the fields and it was great to see all the Gypsies and Travellers laughing and joking as they set up around us. They were hugging each other and shaking hands and you could see they were really happy to be meeting up with old friends and family. It was a great atmosphere.

It wasn’t long before Gypsy and Traveller storytellers Richard O’Neill and Jess Smith arrived and we all gathered around the fire to catch up. We talked about the fair and its history and how it has managed to keep going for 1000 years. It is said to be the oldest horse fair in Europe if not the world.

I told them about the time capsule that we hoped to fill with stories and objects while we were at the fair. It would be buried for 25 years. We already had some stories in there including one from a prisoner who I had met on a recent visit to one of the local prisons as part of my volunteer work with Leeds Gate.

There is also a child’s curls from his first haircut and a ringlet from a little boy aged two.

I had the idea for the time capsule when I saw the copper boxes the boys had made at LeedsGate as part of Vanessa’s (Gate community archivist) ‘Feet on the Ground’ project.

When I was young one of my favorite TV shows was Blue Peter and I had watched the episode in June of 1971 when they buried a time capsule in the grounds of the BBC TV studio where the program was filmed. I thought it would be a great way to bring our community together and in our capsule there are stories and objects from Gypsies and Travellers of all ages.

It wasn’t long before my husband, Simon, got his guitar out and the singing and stories began. As more people joined us around the fire, I watched as they listened spellbound to the tales Richard and Jess had to tell.

Simon kept us all laughing with his jokes and funny stories and Jess brought tears to our eyes as she sang her beautiful ballads.

The rain held off and the music and stories went on until well into the night.

The next morning I was just making a cup of tea and my grandchildren’s breakfast, when Oli from BBC Radio Leeds phoned to say he had arrived.

I had contacted the radio a few day earlier and told them about the 1000 year old fair and the time capsule.

They had agreed to promote the fair and report on the time capsule live from Lee Gap.

We did the first interview sat around the fire with a cup of tea. Then we walked up onto the flash and around the market. I introduced Oli to some of the people who were setting up and showed him the beautiful things that were on sale. I was very proud as I showed him around.

I have listened to the recordings of the program and interviews and Oli and the BBC radio team reported the fair in a very positive way and I was pleased I had invited them.

It was not long before the sun came out and the flash became very busy.

I spent the rest of the day talking to people and I invited them to come and join us around the fire and to see the time capsule. There were lots that did.

Melanie Price kept everybody who had joined us entertained with her stories and brilliant flower making skills. I heard one lady who had an armful of paper flowers telling her husband that Melanie had made her day. I listened as she told him she could not wait to get home and tell her family and friends about sitting around the fire watching the Gypsy lady make her flowers. I knew the lady would treasure them.

(Picture caption: Sonny Lee Reed Putting in the Lego man he has made for the capsule)

When the musicians turned up the fair came alive and lots more people joined us round the fire to listen. I notice that quite a few police officers had also stopped to listen. Some were even tapping their feet and it was obvious they were enjoying the music and atmosphere.

I started speaking to two of the officers and I invited them to join us around the fire for a cup of tea and a bit of stew. The smaller one accepted straight away, but the taller one said he was ok standing. I questioned him as to why he did not want to join us and his reply made us both laugh.

He explained that he was 25 stone and he was not sure the chairs would hold him. He was afraid to sit down in case the chair collapsed. All three of us had a good laugh about it and agreed he would go down in Lee Gap history and would be the talk of the fair for years to come if that happened. When I explained that it looked a bit intimidating with them all stood round. The officer was not only 25 stone but he was also very tall and well over six foot, he understood what I was saying and sat down with the other officer straight away. It was not long before more officers sat down and enjoyed a bowl of stew or a cup of tea as well.

I like to think that the officers went back to their station that day with a more positive view of Gypsies and Travellers and we broke down a few barriers.

I know there were a few others who went home that day with a positive story to tell about the Gypsies and Travellers they had met.

The fair went well and we have added a lot more stories to the time capsule. We have not sealed it yet as there are still children who would like to add to it. The date for it to be buried has also not been set yet.