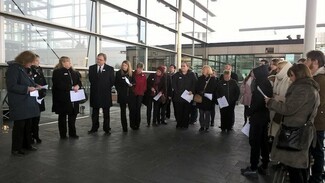 Gypsies, Travellers and supporters in Wales recently gathered together with Welsh Assembly members outside the Senedd to mark Holocaust Memorial Day by leaving messages on a special memorial tree made for the event.

The 2nd Welsh Holocaust Memorial, organised by the Cross Party for Gypsy and Travellers Steering Group, was held on the steps of the Welsh Assembly building on 26th January 2017

(Thanks to Tom Stupple who made the video)

Tom Tom Hendry, a Welsh Romany Gypsy campaigner, led on the organising and created the wonderful tree as a working piece of art enabling people to add their own message of hope.

(The Holocaust Memorial Day tree outside the Senedd.)

The book which the tree was growing out of displayed the estimated numbers of Gypsies and Roma who were killed during the Holocaust to remind people of the large numbers of lives which were lost.

During December 2016 and January 2017, the Welsh charity Travelling Ahead met with groups of young people to create hand-prints to be added onto the tree.  These hand-prints held messages from the young people about what they felt would help them carry on after such a terrible event – in line with the theme for HMD 2017.

The tree was displayed at the Senedd for two days leading up to the memorial service and Assembly Members also added hand prints with messages to the tree.  The messages continued to be added on the day and to see these blowing in the wind on the day held a symbolic feel.

The service was held on the steps with Welsh Assembly Member Julie Morgan speaking and Tom Tom Hendry.  Members of the community contributed with Andree Morgan sharing her experiences of visiting Auschwitz and reading a poem, Leeanne Morgan who read a poem with Shona Probert and Tyrone Price representing the young people by reading a poem.  The service was very moving and well attended allowing for victims to be remembered and survivors honoured.

Main picture, Left to right: Julie Morgan AM, unidentified, Julie James AM, Mark Isherwood AM, Jane Hutt AM and Leader of the House, Isaac Blake from the Romani Cultural and Arts Association. © Travelling Ahead.