Youth Opinion: Why I’m Angry At Channel 4 by Ruby-Leigh Smith 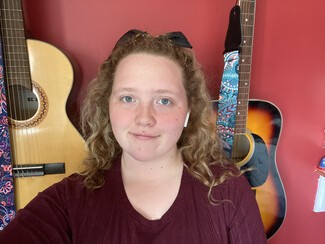 I wouldn’t go back to school for a week. When a program like that has been aired, it is always seen by the parents of children that I go to school with. They spread their hate to their children. It is seen by the children themselves a lot of the time as well. Let the racist comments begin.

And every time something like that is aired, the levels of racism go up. Not to the point where I am openly targeted in the playground, canteen or classroom, but more to the point where people ask me if it is true, and there are racist slurs written on bathroom stalls.

Disgusting. How could I be expected to go to school and have to face this?

The Gypsy Roma Traveller community has so many battles to fight. And now they have another one - against Channel 4. How dare Channel 4 air this program. They have set our community back by decades.

Any battles which we have won in the past have been wiped from memories as we face racist comments on social media and in real life as a result. One Twitter user, after the show was aired, posted, ‘​I’ve never wanted a certain group of people to get wiped out by coronavirus so much #dispatches​’. 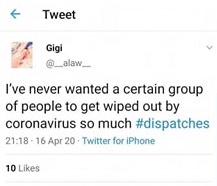 I ask why this program was not filtered and changed. Why is it okay to air such a one-sided program on our community? Why is racism towrads ​our​ culture the last acceptable kind?