Young Traveller girls put their personal experiences into poetry to create The Ballad of Bird McCarthy….. 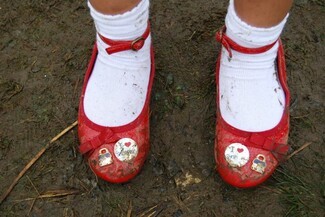 The talented young poets preferred to remain anonymous but told The Travellers' Times,

"I think aspects of me and the other girls live's as being Travellers is reflected in this poem, we all went through some stages where we were called a 'pikey' and felt hurt by this. The idea of this poem was took from our background and part of what we had to deal with on a daily basis. This poem shows the strong impressions people have made on us."

The girls were assisted by the poet Joelle Taylor and  performed the poem at  SLAMbassadors a national youth slam championship for 13-18 year old's in London.

The Ballad of Bird McCarthy…..

Until this day her story was untold

She was a young traveller girl

Had journeyed three times around the world

Then returned to the UK and was forced into school

She felt the authorities had stolen a part of her soul

But Bird had a gift

When she sang people felt their spirits lift

Her voice was a dove exploding from her lips

When Bird sang she launched 1,000 ships

She was a happy girl when she was free

But she was captured and caged by society

And her class mates full of hate, and country people

Did not treat Bird as though she was equal

They called her Tramp, whore, thief and pikey

Wore t-shirts with ‘Just Nick it’ in designs by Nike

They called her the dirtiest fish in the water

But this could be somebody’s daughter

She needed help but didn’t know who to ask

Urging her to die. This is a true tale

Found it hard to keep breathing

She had no friends

And could not depend

So she took herself down to the old winding river

Sang to her reflection in the water

The only place she found peace

The only way she found release

And she sang Hail Mary, Full of Grace

Connecting her soul, holding onto faith

Leaving for a land with no race

A baptism of clear water

Her soul is now free

May God forgive us, RIP.