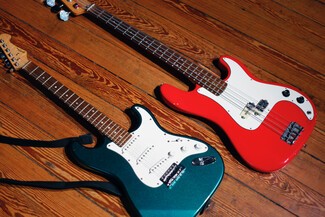 Since 2016, More Music has been working with Lancashire schools with high proportions of pupils from GRT (Gypsy, Roma and Travellers) backgrounds through The Travellers Tales project creating new songs as a way of exploring culture, language and history.

The project Travellers Tales is funded by Lancashire Music Hub. As part of the latest iteration of the project, music leader Leroy Lupton worked in three schools in three weeks blocks over the spring term.  Here he shares his experiences in those schools and music created with the pupils.

During his many years of setting up community music projects, More Music's creative director (at the time) Pete Moser had noticed a distinct lack of engagement between Community Arts and the Gypsy, Roma, Traveller community. He wanted to explore this area and so set up the “Traveller's Tales” project with the intentions of connecting with lots of different people from the GRT community.

I myself was born into a Traveller family and have connections with the local GRT community.....writes music leader Leroy Lupton. Continuing further education and going to University made me quite the anomaly as it is common for Traveller's to leave education and start work after leaving primary or secondary education. I was curious to find out what young GRT and non-GRT children thought about the community's place within society and use my own experiences to challenge stereotypes.

I began the sessions by sharing some of my songs and stories about living inside and outside the GRT community – these often prompted questions from the children such as “Why don't you live in a trailer?”, “Why don't you still travel?” and “I didn't know Travellers could go to University”.

From these questions, we discussed things like culture, traditions, heritage. We discussed the differences and similarities between different cultures and traditions. These discussions were eventually turned into lyrics and then songs by the children.

Some of the standout lyrics from these sessions...

“Different cultures, with people just the same.
Some of us even share the same name,
Different faces, with smiles alike
We may not speak the same language but if we try... we might just get along”

As well as projects at Weeton and St. Andrew's Primary Schools, we set up a 3-week Traveller's Tales project at Marsden Heights Community College – a secondary school in Nelson. This school had been identified with having a high intake of Romany Gypsy and refugee/asylum seeker children. The class I worked in had been set up to help foreign students where English was their second language. In both classes, there was a mix of Romanian, Pakistani, Hungarian, Spanish, Italian and African students.

Although most children weren't from the GRT community, they all identified as being “travellers” in their own right and could see similarities with the GRT and their own cultures. Using songwriting, as the catalyst for conversation once again, we started discussing the heritage and different traditions of each of our cultures. Being an outcast or feeling like an outsider became the theme of our song. The children wrote about how it feels to move to a strange new place and related their words to the GRT community.

Some of the standout lyrics from these sessions......

but we believe what's right for us,
We may be different but we stand as one.
In each other, we will always trust”

Over the course of this project, I have seen Traveller children feel more comfortable when talking, singing and rapping about their culture. We gave them a platform to be proud of who they are and where they come from as well as with the non-GRT children.

It has been a balancing act challenging stereotypes and dispelling myths around the GRT community while trying not to impose personal opinions surrounding the Traveller culture. I would like more GRT children to feel like further education is an option for them and I would like to see more integration between GRT and non-GRT communities and feel like this project has been a great first step toward making that happen.