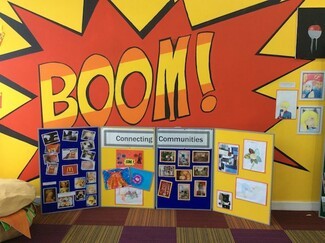 Young Travellers from Beckingham have just completed making a film giving an insight into their lives. Funded by 'The mighty Creatives' and facilitated by Lincolnshire Traveller Initiative and Paradigm Media, the Travellers were in charge of every stage and aspect of the film making procedure. They learned how to use all of the equipment, how to direct, set up shots and edit to arrive at the finished work. In just two sessions they were calling "it's a wrap' the familiar cry of film directors!

The film was shown to an enthusiastic audience at The Showroom, Lincoln as a centrepiece to an art exhibition called 'We are Travellers', that was shown between the 6th and 10th June. Art created by young Travellers from around the county showcased their work towards the Trinity College London, Arts Award.

The works included a giant burger and chips and lots of McDonalds inspired designs. The centre piece of the display on the opening day was the wrapping of the LTI mobile classroom. Inspired by the work of conceptual artist Christo, who had wrapped The Sydney Opera House, a German cathedral and many other large structures, the young Travellers set about wrapping 'The Bus', their learning space which is classroom that has been converted from a standard minibus.

In just two hours the cry of "It's a wrap was heard", and the bus was taken out of the showroom for a short ride in the car Park! Lead Teacher with LTI, Lynne Walker said: "The film and the art exhibition show the creative abilities of the young Travellers we work with and together they show a different side to young Travellers rather than the negative view sadly expressed by many of those who have never met them. The McDonalds inspired work was almost a must! As the young people we work with all love to visit  McDonalds whenever they can."

We envisage that about twenty young Travellers will gain the Arts Award when their portfolios are finally put together later this summer.