The Gypsy Camp at Auschwitz - a poem by Raine Geoghegan 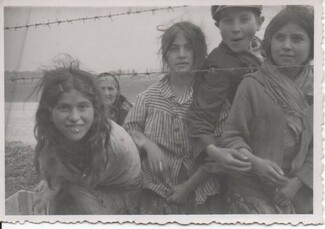 February 1943: At Auschwitz-Birkenau, a family Gypsy camp was set up in a wooden barracks. August 2 1944: Over 4,000 Roma and Sinti men, women and children were murdered in the gas chambers. January 27 1945 at 3pm, Soviet soldiers reached the camp and found only one Rom among the survivors.

The Gypsy Camp at Auschwitz

the branches on the trees bend and sway

leaves fall and settle on the ground

and all is quiet

a woman with long red hair

picks a blade of grass

holds it up to the light

the shape of his mouth

how he spoke her name, Narilla

men kek bissa: we will not forget

an old chal with silver hair

takes his hat off, feels the warmth of the sun

his chavo was four years old when they were imprisoned

a year later he was taken and was never seen again

he had dark curls and hazel eyes

a chavali runs into the arms of her mother

who remembers she once had twelve chavies

all had hair the colour of the darkest earth

men kek bissa: we will not forget

winter birds mourning on the branches

how it has given refuge to the dead

they have become wild breathing flowers

growing in the dust.

“Except for a few survivors, a whole people unique in its life-style, language, culture and art, was wiped off the face of the earth. The death of the Gypsy Nation was more than physical; it was total oblivion.” Azriel Eisenberg, Witness to the Holocaust, 1981 (New York) taken from Danger, Educated Gypsy, selected essays by Ian Hancock.

(Main photograph: Roma children during the Second World War. The photograph would have been taken by a German soldier somewhere in the Balkans around 1942-3. Outcome unknown. Picture courtesy and (c) Bob Dawson)