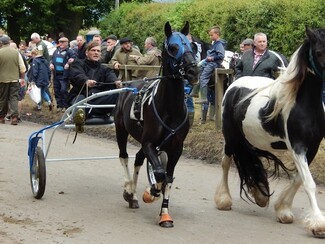 The police investigation into Appleby Fair 2018 does not support the allegations of ‘a complete breakdown of law and order’ at Kirby Stephen in the run up to last summer’s Appleby Horse Fair, say Billy Welch and Bill Lloyd.

A review by top Cumbria police chiefs has found that the allegations reported in the press about a break down in law and order and the police losing control at last summer’s Appleby Horse Fair are largely unsupported by the facts.

The review was requested by Cumbria Police and Crime Commissioner Peter McCall after allegations were reported in the national and local press that the Fair was violent, frightening, and so unsafe that a County Councillor was unwilling to walk round the Fair in the company of the Chief Constable. 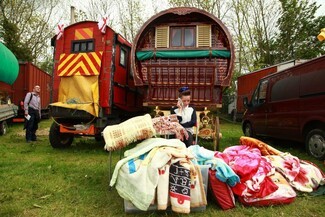 The review provided detailed information on crime reports, police policy, tactics, and operations and confirmed that the fair was, in fact, significantly quieter and less troublesome than the average for the last 10 years and blamed what trouble did happen – mostly in nearby Kirby Stephen – on a single gang of youths. However a local businessman was attacked and beaten after his car accidently hit a child in the street.

In a public statement in response to the police review, the Appleby Horse Fair Gypsy and Traveller representatives said that it should be noted that about one in four of people going to the Fair are Gypsies and Travellers.

“Like any community, of any ethnic origin, there is a very small minority of violent, lawless or criminal elements, but the great majority of all who attend the Fair, including Gypsies and Travellers, are law-abiding people,” they said. 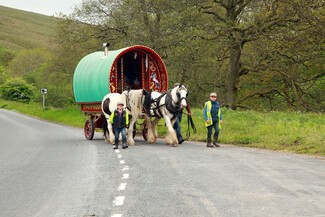 On the way to Appleby Fair © Natasha Quarmby

They added that Gypsy community leaders condemn law-breaking and that anyone who comes to Appleby Fair and breaks the law deserves to be arrested.

Addressing the beating of the local businessman, the Gypsy and Traveller representatives said that recognise that many local people were traumatised by the “barbarous and disgusting assault”.

“No reasonable or sensible person can have anything but contempt and disgust for that assault, for which there can be no possible excuse or justification,” they said. 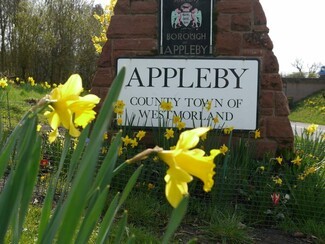 The Gypsy and Traveller reps also appealed to Appleby Horse Fair local residents to not let this isolated act of violence and the few incidents of anti-social behaviour distort their view of Appleby Horse Fair. They also hoped it would not be used to condemn the other 40,000 people who go, for whom the fair is a valuable, worthwhile and enjoyable experience.

Finally, they welcomed the additional measures that the Cumbria police were planning to put into place next year to reassure Kirby Stephen residents.

Billy Welch and Bill Lloyd are the Gypsy and Traveller representatives on the Multi Agency Strategic Co-ordinating Group set up by local agencies and authorities to help ensure the centuries old fair is a safe and enjoyable experience for everyone. 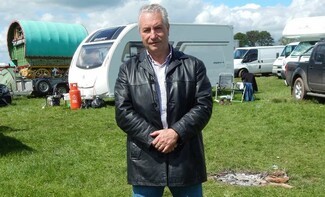 Speaking to the Traveller’s Times at Appleby in 2016, Shera Rom Billy Welch – who has been involved with the fair for decades after taking over the role from his father – said that Appleby had a big spiritual importance to Gypsies and Travellers is unique and that it was “our Mecca”.

“This is the most important event on planet earth in the Gypsy and Traveller calendar,” says Billy Welch. “The reason being that everywhere we go in the world, we are never really made welcome. Even in Darlington, where we have lived for 200 years, we still get people saying to us ‘why don’t you lot go back to where you come from?’ So we never really feel like we belong, but when we come to this ground, and we sit around campfires, it gives us a sense of place, a sense of belonging, a sense of ancestry. We really feel like, for once a year, we have arrived home. We want to preserve our traditions and our culture for future generations and coming here reminds us of that.”

“Just look around you – it’s God’s country,” adds Billy Welch. “It’s beautiful. It’s breath-taking and it’s hard to explain. You have got to come here and witness it for yourselves.”

As long as there is a planet earth. Appleby Fair will exist

To Billy Welch, Appleby is not only sacred, running it is an obligation to his people and a promise to his father when he died and passed on the responsibility of Fair Hill to him. Fair Hill is the site of the original Appleby Horse Fair and is the only camp site managed by Gypsies and Travellers. As the fair grew and grew from the 1980’s, many local land owners also started renting out fields as campsites.

“So my father got involved more – as a Shera Rom – with the fair, and more involved with the council and the police, and they started to coordinate it a bit more,” says Billy Welch. “When he died I inherited that responsibility. He raised me to do it. Even on his deathbed he said; ‘promise me you will look after the fair’.  I promised him that I would preserve the fair for future generations, and I might make some changes, but as long as there is a planet earth, Appleby Fair will exist.” 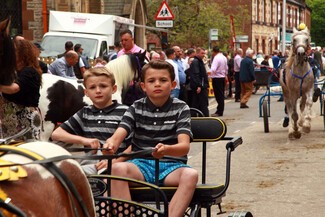 The Gypsy and Traveller representatives’ analysis of the full Cumbria Police review of the policing of Appleby Horse Fair, 2018, found that:

Appleby Horse Fair gives rise to one of the largest single deployments of Cumbia Police resources during the year and is one of the least troublesome when measured by the number of crimes and the number of arrests.

1. The crime rate in Appleby and Upper Eden does in fact decrease during the period of Appleby Fair. No doubt this is due in part to the presence of up to 200 police officers on the main days and demonstrates that the Police strategy and operation is in fact successful at reducing crime.

2. The priority for policing the fair is to ensure the safety of both those attending and of the local community, together with deterring criminality and ensuring public order.

3. During the period for which officers were deployed in 2018, Cumbria Police were requested to attend 8742 incidents throughout the county, an average of 624 per day. Of these 8742 incidents, 168 were related to Appleby Fair, or an average of 12 per day.

4. The average waiting time on 101, the Police Non-Emergency Number, was 3 minutes 24 seconds

5. The total number of incidents reported across the county in this period included one murder, 8 rapes, and over a dozen ‘missing person’ reports, all of which required significant deployment of manpower and other resources, and none of which were connected to the Fair.

6. The number of arrests during the 2018 Fair was the lowest for the last 10 years, and the number of crimes was 15% below average for that period.

7. The number of reported incidents at Appleby Fair in 2018 was 10% below the average for the period.

8. In Eden and South Lakeland districts in 2018, the total number of caravans was down by 45% from the peak (2010) both during the build-up and during the Fair. At the various approved, tolerated and informal stopping places, the number of caravans was significantly lower than in the previous three years, and 37% lower than the peak in 2010. The number of caravans at the roadside was higher in some locations on the A685 around Kirkby Stephen and Brough, due to various factors including the good weather and the closure of private sites used in previous years. This caused increased pressure on these towns.

9. All roadside stopping places were monitored and reviewed daily and assessed according to a formal scale to determine their safety, appropriateness and community impact. If an informal site exceeded the acceptable thresholds on these scales, the caravans were moved on. This is a well-established policy and was improved in 2018 by daily conference calls between the agencies.

10. Policing of Appleby Fair is planned using analysis of previous years’ data. Police resources are deployed accordingly based on that data, some of which is quoted above, combined with new intelligence.

11. In 2018, there were greater numbers of visitors in and around Kirkby Lonsdale and Sedbergh, and those towns experienced an increase in petty crime and anti-social behaviour. At the post-Fair Community Forum review, Police Inspector Latham stated that the incidents in these towns were almost all attributable to a single identified gang of youths, of the type who cause that sort of trouble in all major cities.

12. At the public meeting at Kirkby Stephen, County Councillor Dew alleged that there was a ‘complete breakdown of law and order’ in the town in 2018. This is contradicted by the evidence of police reports and ‘calls for service’, and no evidence has been produced to support it. Kirkby Stephen was crowded at times, and there was some obstruction and some minor isolated incidents of urinating in the street and loose horses, etc. Some adjustments to policing may be required, but the number of calls for service and reported incidents show that the allegation of a ‘complete breakdown of law and order’ is false, and the language used (comparing it to the ‘Wild West’ etc.) was inaccurate, and deliberately inflammatory.

To read other related stories on Appleby Horse Fair just click on the links below:

Billy Welch calls on fair-goers not to arrive too early as Appleby Horse Fair 2018 draws near!

COULD YOU BE CROWNED “BEST IN SHOW” AT THIS YEAR’S APPLEBY HORSE FAIR?