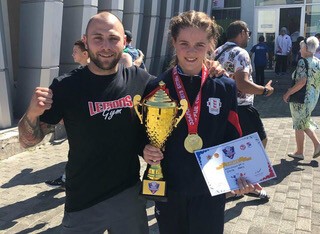 Boxer Paris Smith has won a gold medal at the schoolgirls European Championships in August. The 13-year-old, who fights out of Legions Gym in Clifton Moor, made history at the event by becoming the first fighter from the city of York to represent England at a major international tournament.

Her coach Ashley Martin told YTT: “Paris achievements in boxing are nothing short of phenomenal. When she walked into the gym just over 2 years ago, it was clear from the very first punch she through that she possessed something special. She’s turned heads from day one, and winning the National, then European Championship is a massive testament to her commitment to the sport. We’re really looking forward to what the future may hold for Paris. She’s got the potential to go all the way in this sport, and as long as she continues to believe in her ability, and focuses on her training, nothing can stop her!