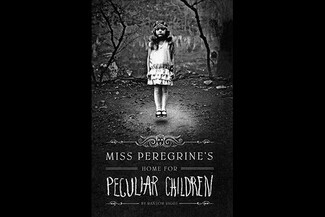 Upon watching the newly released masterpiece by Tim Burton, Miss Peregrine’s Home For Peculiar Children, I was inspired to read the book…. Writes Ruby-Leigh Smith.

I don’t know what I was expecting, but the novel certainly surpassed expectations. The characters were dynamic and amazing, and the use of pictures to tell the story only made the whole experience seem more real. Miss Peregrine, the Headmistress of the Peculiar Children’s Home is like a mother, and it made me yearn for a Headmistress like her; strict but loving and kind. The children, with their strange powers, were three-dimensional, and I felt as if I was in the story beside them; fighting Wights and Hollows, and using my own peculiar abilities. This is the mark of a truly remarkable story - one that is able to draw you in and keep you there.

Hollow City, the second book in a trilogy by author Ransom Riggs, and sequel to Miss Peregrine’s Home For Peculiar Children, opened on the peculiar children in a time of need and struggle, having just lost their Headmistress, Miss Peregrine. They are being led by Jacob, and are rowing their way from Cairnholm, a fictional island off the coast of Wales, to the Mainland, intending to make their way to the peculiar capital of the world, London.

Once they reach the Mainland, the children; destitute and tired, encounter a band of Gypsies, who at first capture the children and threaten them, keeping them locked in a cage. At this point, I was ready to stop reading the story, as Jacob asks his friend, Emma, whether the Gypsies are good or bad. Emma, after hesitation, admits that she is not sure. However, once the Gypsies see that the children have peculiarities, their leader, Bekhir, lets the children out and offers them a ride to the next town where they can catch a train - but only because Bekhir’s son has started becoming invisible, a peculiarity that Millard Nullings, one of the children from the children’s home, shares.

Hollow City, all though my first impression was racism, was an amazing adventure, and one that I enjoyed immensely. The characters, despite the fact that they were suffering, didn’t falter, and I found great strength and pride in their resistance.

The third book in the Miss Peregrine’s Home For Peculiar Children trilogy, I knew that Library of Souls was going to be spectacular, the climax to every problem that the audacious peculiar children had suffered so far in the series. I yearned to know if they would ever save their Headmistress, Miss Peregrine, and the other peculiar children that had been taken from all over time. The children, who I had come to think of as my friends, were dauntless and strived to put others first, regardless of the cost to their own safety.

The sheer brilliance of this last novel brought the whole series up in my mind. Darkness, murderers and people who sought to destroy the world were obliterated by just a few children. This story was inventive and made me laugh, cry and imagine that everything was real; good and bad.

Overall, the Miss Peregrine’s Home For Peculiar Children trilogy was entrancing and interesting, mixed with the right amounts of adventure, sadness and darkness. Ransom Riggs, the ingenious author, has a true gift when it comes to writing, and the use of photography to tell the story is one that is resourceful and never-before-seen. The use of the Gypsies is a way to incorporate an ethnic minority into the story, and an example of the fact that Gypsies - and Travellers - are not animals, and are human, they can do good things as well as bad.

Other book reviews by Ruby-Leigh Smith: