Lois Brookes-Jones: Recognise your value and persue your dreams 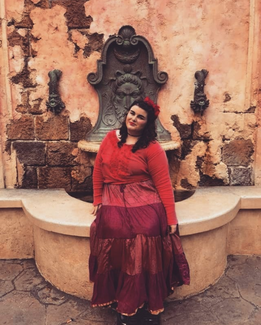 As a young Roma LGBT+ woman, I have not always found the process of self-acceptance and pride very easy.........writes Lois Brookes-Jones.

From a young age you’re taught that ‘exposing’ yourself as Romani to the general gadje population is dangerous, and puts you in a vulnerable position to be open to the discrimination and racism which underpins UK society.

I agree with this narrative, however, I feel like it is victim-blaming and making ourselves palatable to the wider population which appeals to the comfort of gadjes, at the expense of mental health and well-being of the Traveller, Roma, and many variations of our communities which span across the globe. We shouldn’t have to hide our cultural identity to receive basic respect whilst gadje girls put on their hoop earrings and gaudy velvet skirts to appear exotic and interesting as a parody of us when Halloween comes around.

I proudly wear my traditional Roma dress to University because I’ve taught myself that I have a right to occupy space. I began working in the women’s rights movement when I was eighteen and furious at the current state of affairs which targeted me both as a woman, and for being Romani. I had been turned away from jobs after filling in diversity forms, banned from performing my advocacy poetry at local bars, and had been in educational spaces whereby anti-gypsyism was expressed without hesitation and went unchallenged by my educators.

I joined the YWCA GB and can easily say that it changed my life forever. I was invited to travel to Rotherham and undergo research on vulnerable women, attended a study session in Belfast working with YWCA Northern Ireland and YWCA Palestine on conflict resolution. I was able to walk into the Stormont and speak to Politicians directly regarding political prisoners and the impact of conflict on women.

One of my passions in life has been my education. I was accepted for the Queens University Human Rights and Peace Building Summer School and SOAS Law Summer School, to which I received a prize for being the ‘Most Engaged Student’. I want to stress that anyone from the Roma and Traveller community can succeed and accomplish what they wish to. I don’t have top grades, but have persevered in my pursuit for growth and personal achievement.

I was recently granted the opportunity to be a preparatory team member for the 2018 Study Session ‘Women on the Move’ which explored the issues faced by young migrant and refugee women across the globe, all whilst being in the beautiful city of Budapest where I met so many good friends of mine. It was after this excursion that I applied to be an EYWCA Representative for the European Youth Forum, and was delighted to have been accepted for this position.

Roma and Traveller youth owe it to ourselves and our communities to be the change we wish to see in the world, pursue our dreams and ambitions, and understand our value.