Brighton Council’s use of public protection orders against Travellers “disgraceful”

Friends Families and Travellers have written to Brighton & Hove City Council to warn them that their “disgraceful” use of Public Space Protection Orders against statutorily homeless Gypsies and Travellers is in conflict with government guidance.

PSPOs were introduced in Brighton and Hove on the 1st January 2017 despite protests from human rights organisations and a petition with over 5000 signatures from city residents. PSPOs were created to tackle anti-social behaviour, but have been criticised because their broad scope is ripe for abuse. In Brighton and Hove, the behaviours which were deemed to be of an ‘anti-social’ nature include occupying caravans, vehicles or tents and driving any vehicle on grass. Those found in breach of this may be subject to a criminal offence and can be punished by a fixed penalty notice or prosecution. It is clear that the target groups for this criminal offence and fixed penalty are rough sleepers and statutorily homeless Gypsies and Travellers.

On Monday 19th March 2017, the Neighbourhoods, Inclusion, Communities & Equalities Committee met at Brighton and Hove City Council to discuss the use of Public Space Protection Orders (PSPOs) in 12 locations in Brighton. The aim of the meeting was to review the use of PSPOs since their introduction in January 2017, but councillors failed to answer questions about how their use of PSPOs were disproportionately affecting statutorily homeless Gypsies and Travellers. At no point in the discussion did councillors mention new guidance issued by the Home Office in December 2017 which said that PSPOs should not be used to unfairly target homeless people.

Brighton and Hove resident, Human Rights Barrister and Joint Head of Garden Court Chambers, Marc Willers QC said that he believed that the council’s use of the PSPO’s was unlawful.

“Brighton and Hove City Council’s use of PSPOs to target vulnerable groups such as Gypsies and Travellers and rough sleepers is contrary to Government guidance and, in my view, inhumane and unlawful,” he said.

According to a review report by Brighton and Hove City Council since the introduction of PSPOs, “Many verbal warnings have been given and 123 warning letters were issued.” Despite assurances that the PSPOs would be used to tackle anti-social behaviour and not to target specific groups, almost every single warning letter issued during this time was to Gypsy and Traveller families and individuals. The vast majority of those receiving the warning letter are statutorily homeless families and individuals who cannot get a pitch on a Traveller site because of a chronic national shortage of Traveller sites, as evidenced in the most recent government caravan count which found that 17% of Travellers are forced to live on unauthorised sites and public spaces.

let’s not forget that it is the council who are failing in their duty to identify land for sites for Gypsies and Travellers!

Following a national consultation period with charities and organisations working closely with homeless people, the Home Office released guidance which was to “make sure powers are used an intended” and to ensure that “the most vulnerable, including the homeless, are not disproportionately targeted”. The guidance urged local authorities to “consider measures that tackle the root causes of the behaviour”, instead of using PSPOs to criminalise the activity.

On 21st January 2018, Emma Nuttall, Advice and Policy Manager at Friends, Families and Travellers wrote to Geoffrey Raw, Chief Executive of Brighton and Hove City Council, drawing his attention to the fact that the council’s use of PSPOs against statutorily homeless families is in direct contradiction of Home Office guidance issued in December 2017. In the letter, Emma Nuttall highlights the adverse effects the legislation has on Gypsies and Traveller in particular, who experience high levels of homelessness due to a chronic national shortage of sites. The letter received no response.

“It is disgraceful that senior officials at Brighton and Hove Council continue to ignore national guidance and continue to turn deaf ears to the needs of both homeless people and Gypsy and Traveller families,” said Emma Nuttall. 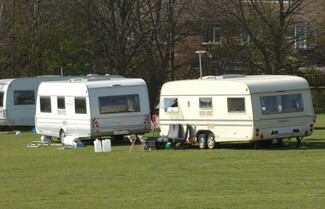 Public Space Protection Orders (PSPOs) are a product of the Anti-Social Behaviour Crime and Policing Act 2014. These were introduced, in part, to target behaviours which could be deemed to be “harassment, alarm or distress” to any person or conduct which was capable of causing ‘nuisance’ or ‘annoyance’.

While theoretically, the PSPO aims to enhance community cohesion and promote a better quality of life, the broad definition and vague notions of ‘anti-social’ meant that they were open to abuse by local authorities who wish to target specific communities, rather than behaviours. The Anti-Social Behaviour Crime and Policing Act 2014 allows the priorities of some communities to have precedence over the rights of others. Behaviours deemed ‘anti-social’ around the country, included rough sleeping or and “persistent” begging – “persistent” being identified as “on more than one occasion”. The result is that PSPOs have disproportionately affected some more than others and criminalised some vulnerable communities, including the homeless, Gypsies and Travellers.

The behaviours deemed as ‘anti-social’ were supposed to be determined through public consultations and yet in this instance, Brighton and Hove City Council launched a specific consultation proposing to use PSPOs for unauthorised encampments.

About Friends, Families and Travellers (FFT)

Friends, Families and Travellers is a leading national charity that works on behalf of all Gypsies, Roma and Travellers regardless of ethnicity, culture or background.

The Travellers' Times will be publishing a legal blog by the UK's leading lawyers on Gypsy and Traveller rights on the use and misuse of Public Space Protection Orders.