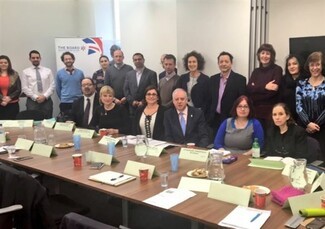 The Jewish human rights charity René Cassin and the Board of Deputies of British Jews recently held a roundtable between Jewish and Gypsy, Roma and Traveller (GRT) organisations.

The roundtable, timed to mark International Day for the Elimination of Racial Discrimination on 21 March, was a landmark meeting between the communities.

Participants, including rabbis, activists and lay leaders, examined Jewish and GRT relations and explored the challenges that the different communities face and what misconceptions and prejudices each community is trying to counter.

Jews, Gypsies, Roma and Travellers have a great deal in common. They share a history of persecution that includes the Holocaust (sometimes known in the Romani community as the Porajmos). But these shared concerns are also contemporary – all communities are affected by rising hate crime.

Marie van der Zyl, Vice President of the Board of Deputies said that this was the first time the Jewish and Gypsy, Roma and Traveller communities had had such a high level, cross-communal conversation and that it demonstrated the Board of Deputies’ solidarity with other minorities and their firm commitment to promote good relations between communities.

“It is crucial that we share our experiences, as we did in this meeting,” said Marie van der Zyl.

“The Gypsy, Roma and Traveller communities – like the Jewish community – have gifts and talents which make Britain a vibrant society that we are proud to be part of. Today will serve as a catalyst for further encounters between our communities so that we can get to know each other better.”

Mia Hasenson-Gross, director of René Cassin - the Jewish voice for human rights - said that the Jewish and the Gypsy, Roma and Traveller communities were united by tragic history but also by a very real present reality of rising hate crime directed towards ethnic minorities.

“René Cassin is concerned that the Gypsy, Roma and Traveller community still faces endemic discrimination in the UK and across Europe today.  It is the kind of discrimination that permeates the deepest levels of society, such that it is often not even recognised for what it is. This event is welcome and hopefully signals the start of closer cooperation and solidarity between our two communities.”

Yvonne MacNamara, Chief Executive of the Traveller Movement also welcomed the chance to show solidarity and said that hate crimes against Gypsies, Roma and Travellers have been overlooked for too long.

“Events such as these are a great platform to raise the public’s awareness of these crimes, but also importantly to encourage Gypsies, Roma and Travellers to come forward and report hate crimes against them,” she added.

Chair of the Gypsy, Roma and Traveller Police Association Petr Torak, said that the GRTPA was very keen to with other community groups that share common challenges and history.

“This cooperation will assist us to deliver the best service to our communities and to educate the mainstream society at the same time,” said Petr Torak.