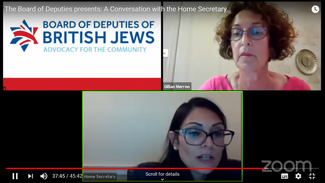 The bombshell comment came in a zoom meeting arranged with Jewish community leaders. In the same meeting, Priti Patel also shared confidential details about an impending court case leading to claims that the Government Minister was in contempt of court.

Priti Patel, the minister responsible for law and order, also said that the Government is working on the “criminality” around both “traveller communities” and “unauthorised encampments”.

Home Secretary Priti Patel also suggested that Gypsy and Roma communities “are absolutely separate” from ‘traveller’ communities and that it is “criminality”  among Traveller communities on unauthorised camps that is causing concern for the Government.

The Home Secretary, responsible for law and order, made the comments in an online event hosted by the Board of Deputies of British Jews. It was broadcast live on Facebook, Twitter and YouTube, and the footage remains on all three sites.

During the event, the Home Secretary was asked about Gypsy, Roma and Traveller communities. In the course of her answer, she said:

"The Home Office's work in this particular area actually refers to some of the criminality that takes place, and that has happened through traveller communities and unauthorised encampments. Now that's very different to gypsy and roma communities. The two are absolutely separate. Where we have seen criminality, violence taking place. We saw one particular traveller criminal - I can't go into the details of this but basically we saw a police officer that was effectively murdered through a robbery that took place by a traveller family.  So there are things that do need to be done and looked at, but obviously from a Home Office perspective we are absolutely doing that."

A furious Jewish campaigner who was in the meeting contacted the Travellers’ Times to raise their concerns.

“It is very clear that the Home Secretary is referring to the killing of PC Andrew Harper, which has received widespread media coverage over the past year,” the campaigner said.

He added that the court case was ongoing due to appeals and that the Home Secretary’s public comments could be contempt of court.

“The Home Secretary's words on legal matters have significant weight, and seriously risk prejudicing the outcome of the killer's appeals and the sentencing review.”

A “traveller family” on an unauthorised camp “effectively murdered” a police officer??? Priti Patel gets it wrong

The three convicted teenage killers of PC Harper were found not guilty of murder and they were not Irish Travellers and had no connection to “unauthorised sites”. Nor where they known to be related.

Jewish community leaders have often stuck up for Gypsies, Travellers, and Roma because of a shared experience of persecution.

The Home Secretary’s comments could be paving the way for the Governments new anti-Traveller laws set to be launched this Autumn, say campaigners.

In November last year, the Government announced that it was holding a consultation on the criminalisation of unauthorised Traveller camps. Earlier this year Home Secretary Priti Patel told MP’s that the new anti-Traveller laws would be brought forward this autumn.

At the time of PC Harpers killing, Pauline Anderson, the Irish Traveller chief Trustee of the charity the Traveller Movement, offered her condolences to his family and colleagues on behalf of all Gypsies and Travellers.

The Travellers’ Times has approached the Home Office for comment.