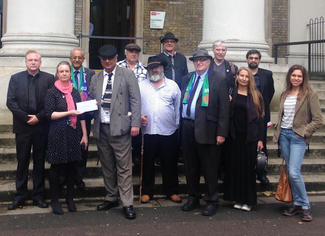 The Imperial War Museum has agreed to demands from the Gypsy Council in the face of appeals to both the Holocaust Exhibition – currently at the museum - and the Holocaust Memorial Commission for more recognition and representation of the Roma and Sinti Holocaust.

The appeal was made by the Gypsy Council’s Gratton Puxon after the August 2nd Hyde Park Roma Holocaust Memorial event to remember the estimated 1/2 – 1 million Roma and Gypsies murdered by the Nazi’s in the Second World War and followed on from a meeting with Museum officials the week before.

“Jews and Roma died together,” said Grattan Puxon. “We are a brotherhood of victims.”

“Today amid rising anti-Jewish and anti-Gypsy racism we need each other, and can only be stronger in common cause and unity.”

The museum is currently hosting an exhibition on the Holocaust, but Gypsy, Pavee and Traveller campaigners have been criticising the lack of representation and recognition of Roma victims alongside the 6 million Jews who were also murdered by the Nazi regime because of their race.

After the Hyde Park Memorial service finished Gypsy Council delegates and supporters went to the Imperial War Museum in Lambeth, London, to hand in a letter with their demands. The museum had agreed to the meeting and to receive the letter in the face of a planned Gypsy Council demonstration.

During the meeting at the museum on the 28TH July, officials, acceded to the Gypsy Council’s request to correct the commentary of a documentary film showing the transport of Holocaust victims by train to the concentration camps. The original commentary wrongly identified those victims as Jewish despite the fact that investigative and historical research had proved beyond doubt that they were in fact Roma. The film – with the iconic shot of a young girl peeking out of the door of a cattle truck as it left Holland – was in fact of Settala Steinbach, along with other members of her family.

In the letter, addressed to Diane Lees, Director-General of the Imperial War Museum, the Gypsy Council also asked the museum to change how the museum promoted the Holocaust Exhibition to include Roma in the title.

“Recognising that the murder of Roma, Gypsies and Travellers was every bit as much a racist genocide as the murder of Jews, we look for a change of terminology from “Jews and other victims” to “Jews, Roma and other victims…” Otherwise the Nazi apologists who sought to excuse the genocide of Roma, Gypsies and Travellers on the grounds that they were “a-social” will retrospectively have triumphed,” the letter states.

Gratton Puxon said that more work lay ahead for Roma, Gypsy and Traveller campaigners. He added that there must also be proper representation on the Holocaust Memorial Commission, the Government appointed group planning the new London Holocaust Memorial site which will be opened in Westminster near Parliament.

In an Appeal to Sir Peter Bazelgette, the head of the Holocaust memorial Commission, Grattan Puxon said: “Today amid rising anti-Jewish and anti-Gypsy racism we need each other, and can only be stronger in common cause and unity.”

“To bring that about, we want you to forebear from continuing the marginalization and exclusion of Roma in Europe. And you can do this by letting us into a common commemoration of the Nazi policy which targeted Jew and Rom under almost identical racial laws.”

“Yes, there were other victims. And we remember and mourn them. But the Romani people, the Jewish people, were uniquely singled out for extermination on the basis of biology. They believed they could stamp out our DNA.”

“Sir Peter, I appeal to you personally to include Roma before you set in stone close to the British Parliament an edifice which might permanently offend the 500,000 of our communities who from so many quarters are viewed with prejudice. I ask you to set aside prejudice and respond with compassion and positivity.”