We wanted to explore, subvert, and challenge prejudice against Romany Gypsies 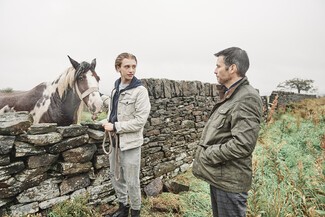 Series four of Ackley Bridge, a TV series set in a Yorkshire secondary school, has received widespread acclaim for its portrayal of Romany Gypsy characters and the scenes from their lives, including the deeply respected traditions followed at a Romany funeral and the difficulties which could precede a marriage between two young people. I gave a big thumbs up to Ackley Bridge to the Channel 4 teenage drama in my previous review for the Travellers’ Times. After this was published, I hunted down the cast and the TV production company that created the series for some interviews.

Actor Ryan Dean took on the role of Johnny Cooper, the main character from the Romany Gypsy family that pulls up and stops on the Ackley Bridge playing field. He tells me how he prepared for the role. Having known people from the Romany Gypsy and Irish Traveller community as both friends and colleagues, Ryan Dean first consulted with them. “I feel that I had a little insight into customs and the respect and honour that I believe is key within the community, which is just one thing that I love about it,” he said. 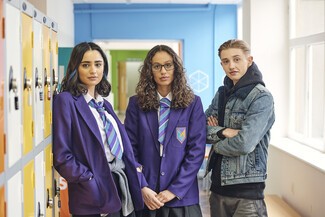 There are so many negative perceptions of Romany Gypsies and Travellers portrayed in the media and it was refreshing to see a positive take on a character with Gypsy heritage. I asked Ryan Dean if he had any perceptions of the Gypsy and Traveller communities himself that playing the role of Johnny Cooper had changed. He said that he didn’t have any negative perceptions because he already had Gypsy and Traveller friends, adding that he hoped that Ackley Bridge and his portrayal of Johnny Cooper would challenge any negative perceptions that the viewers might hold. I then asked Ryan what was the hardest thing about playing Johnny Cooper. “The hardest thing was just making sure I didn't put too much pressure onto myself and to let the beauty of the character speak for himself, and let the writing speak for itself, and allow myself to be a vessel to tell what I hope is many people's stories,” he answers.

I can also relate to the scenes in Ackley Bridge where Johnny has to confront racism against his community. I have suffered racism from both teachers and my fellow students at schools which I have attended. There have been countless times that I have dreaded the next day of school. There have also been countless times that I have literally felt every single second of the school day, and had to educate people around me on what is racist and what the facts are about my community. In this way, I feel that I myself can relate to Johnny Cooper, who, along with his sister, Queenie, are not afraid to challenge stereotypes and share facts and figures. An example of this happens in the first few minutes of the first episode, where Johnny recounts laws which mean that it is legal for him and his family to stop on the school field. The whole series was incredibly well researched, I believe. 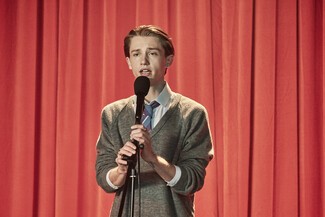 I asked The Forge Executive Producer George Ormond what research they did about the Romany Gypsy community and why they decided to introduce a Romany Gypsy character into series four in the first place.

“We were very keen from the offset to get things right so we did extensive research, including talking to a charity and consulting closely with our advisors as well as talking to our schools advisors on their experiences of working with the Romany Gypsy community,” says George Ormond. “The Romany Gypsy community has a strong sense of tradition, and has been subject to discrimination, prejudice and misunderstanding. Series four felt like a great opportunity to explore, subvert, and challenge those preconceptions as well as introducing a brilliant new multi-faceted family, with Johnny at the centre of it.” 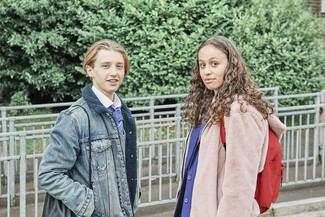 From Series 4 of Ackley Bridge

Note from TT Editor: Part of the research The Forge undertook was using Romany Gypsy poet and author Damian Le Bas as a consultant for series four, George Ormond also tells Ruby. This came as a bit of a surprise to us as Damian also works part time for the TT! So, to allay any concerns about a conflict of interest, we honestly didn’t know this when Ruby came to us and pitched an article about Ackley Bridge, with a follow up interview with Ryan Dean and The Forge.

Some Gypsies and Travellers where disappointed that Johnny Cooper wasn’t played by a Romany Gypsy actor, so to address their concerns I asked George Ormond the million-dollar question: Did they try to find a Romany Gypsy actor?  “Yes, we did,” said George Ormond. “Our team assembled the very best actor for each role, based on all aspects and idiosyncrasies of personality and character. We also reached out directly to the community but didn’t succeed this time.”

I ask if Johnny Cooper will appear again in the next series. “We are yet to confirm future series but are already developing our storylines and have exciting plans for Johnny,” says George Ormond.

“We’ve had really good feedback from the Romany Gypsy community which was so important to us,” adds Ryan Dean. “If I’m honest, the reception and feedback across the board has exceeded what I could have hoped for!”

By Ruby Leigh Smith (with editing support from TT Editor)

Note from TT Editor: Writing up a two-handed interview into a feature is an incredibly hard thing to do and fair play to Ruby for getting the interviews with Ryan Dean and George Ormond in the first place and then jumping in at the deep end and writing them up as one article! Ruby wants to study journalism at university and we are sure she will go far. Well done Ruby!