The Myth of “Gypsy Criminality” 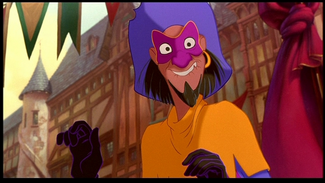 Have you heard of the biggest organised crime ring in the world? No, not the bankers. More underground. Bigger than the Italian or Russian Mafias, more close-knit than the Triads, more dangerous than the Mexican cartels. According to the tabloids the Roma, Europe’s most marginalised and impoverished ethnic minority, are in fact a sophisticated network of thieves, traffickers, and con-artists. It is a lie peddled by the factually lazy that Romani people are fundamentally criminal by nature. The facts just don’t add up however, and there is no evidence of higher rates of criminality amongst Romani communities than amongst any other.

Did you hear the one about the Roma begging syndicate? Romani people supposedly coordinate a begging racket which spans the entire European continent and brings in thousands - no - millions of euros to fund lavish lifestyles in Eastern Europe.

Poor people living in close knit families and communities certainly share their wealth amongst themselves to a greater degree than rich people do. But begging is not a lucrative trade, no matter what the Daily Mail tells you. Begging Romani families may earn more as a group, but they don’t earn enough to get themselves out of desperate poverty.

2) Gypsies will steal your children.

One of the most pernicious myths about Romani people is that they are predisposed to periodically stealing children from white people. But there is no evidence of this ever actually happening. In fact throughout history and into the modern day it has usually gone the other way around, with Romani children being taken away from their families by the state to try and erase their ethnic identity through assimilation. A European Roma Rights Centre (ERRC) report from 2018 shows that Romani and Traveller children in England are three times more likely to be taken from their families and put into care than any other child. The same happens in Hungary, where the ERRC found that Roma account for 80% of all children in state care in one county, despite only representing 20% of the local population.

Yet it is the completely unfounded myth of the ‘Gypsy child snatcher’ that still sparks mob violence and witch-hunts across our continent. In Italy, Roma were driven from an area of Naples in 2008 by an angry mob using molotov cocktails after rumours circulated they had stolen a six-month-old baby. In 2010, British tabloids reported that Roma may have stolen Madeleine McCann in Portugal. In 2013, a blond, fair-skinned blue-eyed Romani child in Greece was assumed to have been kidnapped by Roma and her guardians were arrested. The Romani couple were only released after DNA tests proved that the child, known to the world’s papers as Maria the ‘blond angel’, was not in fact an abductee. The little girl was still taken into state care though, as were five of her siblings.

The real damage was done by the media however, and fake cases of Gypsy child snatching popped up all over Europe. Shortly after the Maria case a little girl and a little boy were taken away from their families in Ireland for DNA testing amidst fear that they had been snatched by Roma. More recently, attacks on Romani communities erupted in Paris this year after rumours of Roma in white vans stealing children circulated on social media. 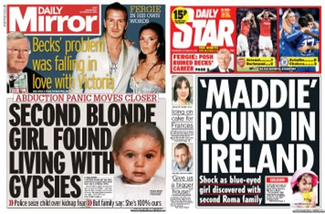 3) Romani people are aggressive and commit a disproportionate amount of violent crime.

This is a favourite of keyboard racists who often recount a time when a Romani person was involved in a violent altercation with them, or someone they know, or someone they heard about once down the pub. From Bulgaria to Bristol, stories abound of Romani and Traveller people brutally attacking members of the public, invariably in headlines splashed across tabloid papers. Whatever the incident, it is usually reported alongside calls to curb ‘out-of-control Gypsy crime’. Often incidents of individual violence are the preface to mob violence and collective punishment against entire Romani communities.

Romani and Traveller people are sometimes violent, but no more or less so than any other type of people. There is a tendency, reinforced by biased reporting, to see Romani people as criminals rather than victims. A 2018 UK report found that this attitude is just as prevalent amongst the police. The report found officers in 43 different police forces were more likely to presume that Romani and Traveller people were perpetrators than victims. This results in disproportionate policing of these communities, including stop and searches.

In 2010, the Met Police claimed that 1,000 Romani children were being trafficked and forced to commit street crime by Roma in the UK. They carried out a £150 million operation and arrested 126 Roma, of which 12 were charged with unrelated offences. The so-called ‘trafficked’ children were found to be travelling with their parents, none of whom were prosecuted for trafficking. The implication, according to the Traveller Movement, was that Roma in general are involved to a greater degree in human trafficking. This is what hit the headlines. Not only will Roma steal your children, they’ll sell them too.

Roma are in fact much more likely to be trafficked themselves than they are to be traffickers.The ERRC and People in Need (PiN) carried out the only known multi country research on trafficking in Romani communities in 2011. They found that Roma are significantly overrepresented amongst trafficked people. The organisations estimated that Roma represent 50-80% of trafficked persons in Bulgaria, up to 70% in parts of the Czech Republic, at least 40% in Hungary, around 50% in Romania and at least 60% in Slovakia.

5) Romani people will cheat, scam, or defraud you rather than do an honest day’s work.

Few Romani people work nine to five jobs. Many of them, particularly in the UK, are self-employed and do jobs which lend themselves to mobility. Historically this meant they could always find work even if they were forced to relocate to a new area, doing jobs such as metalwork, farriery, farm labour, entertainment, and horse trading. Nowadays, most Romani and Traveller people do not live a travelling lifestyle but still have occupations which lend themselves to one (e.g. collecting scrap metal, tarmacking, roofing, sales).The perceived unaccountability of self-employed tradesmen, especially nomadic ones, has led to many people being suspicious of them as cheats and tricksters. But a Romani or Traveller person is no more likely to scam people than any other person. Most work ordinary jobs, just trying to get by like anyone else. Unlike other self employed people however, they have to contend with distrust and hostility from the general public, and often have to hide their ethnicity as part of their day-to-day work.

Elsewhere in Europe, Romani communities living in abject poverty are also treated as scammers and scroungers. These Roma who have been systematically failed over generations by racist institutions have little opportunity to work at all, other than small scale recycling of metals and plastics. It is these people who have really been cheated. Some of the poorest people in Europe are Roma who have been unemployed for several generations and who are able to claim only a small amount of social welfare. Usually this does not provide enough money for a proper home, enough food, or equal access to public services. These poorest of Roma are the true victims of the criminality of European society. A society which illegally bulldozes Romani homes, sends police raids to brutalise Romani families, and segregates Romani children in school. The biggest lie of all is the one that tells us that European society suffers from the criminality of Romani people. In fact it is the other way around. It is the Roma who have been scammed, defrauded of their basic human rights as European citizens in a society which systematically marginalises them from birth to the grave.