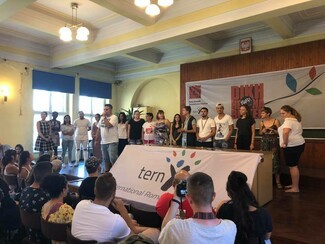 Today, Tyler Hatwell Youth Outreach Worker at London Gypsies and Travellers brings us the last in this series and shares his thoughts on the final day of the unique event that brings 300 young Roma and non-Roma from across the world together to learn about the Roma genocide.

Friday was the final day of organised activities............writes Tyler Hatwell.

The day before we had attended the official commemoration at Auschwitz-Birkenau, met with survivors and spoke about the future. A “heavy” day about big concepts. Friday was smaller, and was about saying goodbye; I guess it was about the future too.

We had a later start time (useful because many who were leaving Friday night had been up late getting the last drops out of Krakow nightlife and each other’s company) for session one. The atmosphere was different to how it had been the rest of the week, we all knew it was goodbye. In the first session it was about information sharing and celebration of achievements. We went around the circle and each spoke about what we had done to make a positive difference to GRT communities.

This ranged from huge national work (getting public policy changed or campaigning tirelessly against racism and antigypsyism) to small individual projects or tasks (giving out food parcels to homeless Roma, starting a karate club for Roma and non-Roma in a deprived part of town to encourage integration and to give young people something to keep them away from the criminal element in the area). I spoke about my work with the charity London Gypsies & Travellers and how I had both been attending meetings to inform the government or other influential organisations about the reality for young Travellers in education as well as the individual mentoring work I do in supporting young people to access the right education, training or activity for them. It was inspiring to find out how much was going on throughout Europe to fight the good fight. Every person had a story to tell.

After this we met in the garden of the university. We had to come up with a presentation for the closing ceremony in a few hours. Our group’s idea was to create 300 messages (enough for each participant) of what we have learned from the experience. Messages of resistance, fighting and always challenging hatred but also of love, kindness, universal brotherhood, compassion or pride. We put these in a cardboard box painted up like a treasure chest. Our performance would be us, as a team unlocking the treasure chest of messages with the “Dikh He Na Bister” key. Then a song played and we threw these messages at the crowd.

For the actual ceremony each group was different. Some did videos, rapped, sang, danced, read poems or simply spoke about their experiences. The most moving moments to me involved Raymond Gureme, a survivor who had been with us all week and told his incredible story of resistance and struggle.

A French woman wrote a poem eulogising his impact on her, the rest of the participants and the world. Later Raymond himself sang a song written for him by his sister in the camps. Both were greatly moving.

All the groups did themselves proud but a special mention should go to a woman who told her story of having been beaten into a coma as a little girl for being Roma. Since then she had hidden her identity until her mother’s passing. She told her husband she was Roma at this point and he left her and she was forced to rebuild her life. When, at the end of the story, she said that despite everything she was now proud to be Roma the collective cheer shook the room!

After the ceremony were goodbyes, last chances of meeting new people and cementing friendships with those met earlier in the week. Each one of us had taken something different from 'Dikh He Na Bister'. Some left Friday night, others stayed on a day or two but this was the goodbye. It had been a whirlwind week and the only thing we could all be sure of was that this experience wasn’t something that we were going to leave in Poland.