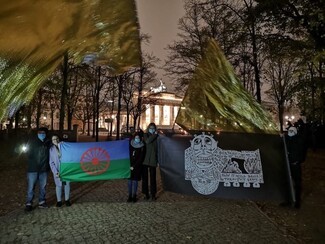 We are pleased to say our YTT Editor Lisa Smith is currently volunteering with  RomaTrial e.V and will be reporting on more international issues for Travellers' Times over the coming months. She is working on a range of projects, including planning for the World Romani congress 50th year anniversary and ongoing media and art projects organised by RomaTrial e.V.

Here is the first of those reports ... YTT coming at you from Berlin ...

On November 9th, 2020, members of the Sinti and Roma community, as well as activists and supporters from left-wing organisations, gathered in Berlin at the Memorial site dedicated to the Sinti and Roma murdered under National Socialist rule during WW2. The event was organised by DIE VIELEN e.V. a non-profit association.

They gathered in protest against approved plans by the German government and the S-Bahn railway to begin construction of a new railway line set to go through the site of the memorial.

A decision that many say was taken 'behind closed doors' with no initial consultation or planning with Roma and Sinti communities.

Romani activist, David Paraschiv, echoed the statement printed on a black and white banner he held up alongside colleagues from Roma Trial e.V  - an organisation committed to combatting anti-gypsyism.

It read, 'Your train took me to my death now it will drill through my grave', the point being, to highlight the absurdity of the proposals by the government and railway companies since the Deutsche Bahn played a central role in delivering Holocaust victims to their deaths. 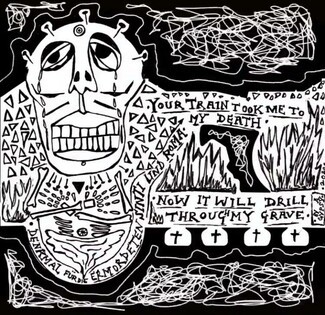 The fact that these proposals are even being considered has outraged many Roma and Sinti across Europe. It took  67 long years of civil rights work to even have an official place of remembrance for these victims of the Holocaust in Berlin.

The creator of the artwork Damian James Le Bas pointed to the importance of the memorial to many Roma and Sinti families: "The Memorial to the Murdered Sinti and Roma of Europe was officially opened on 24th October 2012, 67 years after the end of the Second World War. It was a moment of some catharsis for those whose family members had been executed for being Gypsies. Many of them had no graves to visit: their relatives' bodies had been incinerated, burned in open pits filled with diesel, or buried in undocumented rural mass graves."

Hamze Bytyçi, CEO of RomaTrial e.V, delivered a rousing speech at the demonstration highlighting the ongoing human right violations of Romani people across Europe, drawing attention to how only last week the ex-President of Kosovo Hashim Thaci was charged with war crimes and crimes against humanity including murder and torture during an alleged campaign by the ethnic Albanian Kosovo Liberation Army (KLA) between 1998 and 1999.

"He was jointly responsible for the torture, rape, murder, and expulsion of over 100,000 Roma from Kosovo from 1998 to 1999. It is always inexplicable to me that such countries are considered safe for Roma when we have such people in top political positions."

He also called upon the Berlin government to acknowledge the importance of the memorial site: "This place, our memorial for the murdered Sinti and Roma of Europe, is not just a place of warning, but an expression of the responsibility that this country has towards us, our Jewish sisters and brothers and other groups of victims of the Nazi era. We, therefore, call on the Berlin government not to turn a blind eye to its responsibility. Protect our monument, our dignity, and our people and their rights! The monument remains!" 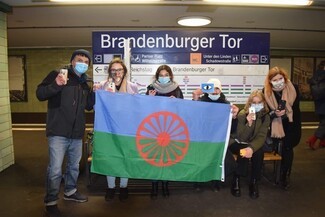