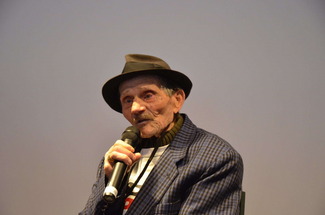 ‘We are privileged to announce that Raymond Gurême will be visiting Scotland from the 3rd – 9th of June!’ says Romano Lav

Raymond Gurême is a well-respected activist within the Gypsy, Roma and Traveller community. He is a survivor of the Roma Genocide, escaping from nine concentration camps, and is a former member of the French resistance.

He was born in 1925 into a family of French Manush Travellers and was brought up on the road; following the circus around France and Belgium. He started training in the circus at the age of two, but it came to an end in August 1941 when French police placed him and his family in a concentration camp. This would be the first time Mr Gureme escaped from a concentration camp; using his acrobat skills he learnt from the circus. After escaping he stole food to throw back over the wall – keeping his family alive. Despite this he was soon recaptured and put in a different camp and lost his family, finding them again after seven years, in Belgium in 1952. He and his family then moved back to France.

Scottish Gypsy, Traveller and Roma campaign organisation Romano Lav, with support from the Scottish Government and La voix de Rroms, have organised a week-long visit for Raymond to share his message of equality and inclusion. He will begin his journey in Glasgow, before travelling to Edinburgh and then to the annual Appleby horsefair in Cumbria!

Throughout his visit there will be opportunities to meet with him and to hear his experience. Among other events he will meet with Roma and Showman communities in Glasgow, as well as have an event with young people in Edinburgh. There will also be an official visit to the Scottish Parliament and a stage has been arranged for him at Appleby Horse Fair.

Chairman of Romano Lav, Scottish Traveller Activist, Davie Donaldson, said that it was crucial never to forget the Holocaust.

“It’s a UK first!” said Davie Donaldson. “We are very proud that we can host Raymond and this is a once in a lifetime oppurtunity to hear from a Traveller who had direct experience of the Holocaust. We believe it’s crucial we never forget the terrors of the Holocaust – but also that we remember the resistance during it.

Raymond is inspiring and reminds us that we can resist racism, discrimination and oppression. Everyone should make an effort to meet Raymond on this tour – an opportunity not to be missed!”