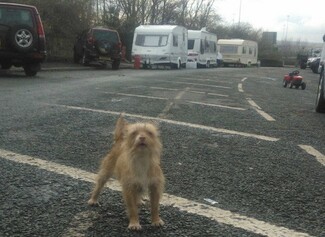 A pioneering way of dealing with ‘roadside encampments by Gypsy and Traveller people’ saved Leeds City Council and police nearly a quarter of a million pounds in legal and clear up fees a year whilst improving “community cohesion”, says a new report.

The report, published by De Montfort University and seen by the Travellers’ Times, gives a big thumbs up to Leeds Gypsy and Traveller Exchange’s role in coming up with negotiated stopping to transform the relationship between Leeds mobile Travellers, local settled people, and Leeds City Council and police.

‘Negotiated stopping’ is an alternative to the more usual ‘zero tolerance’ approach and consists of a contract between mobile Travellers and councils that saves authorities money in clear up and legal fees, rewards good behaviour by Travellers living on roadside encampments and provides household rubbish and waste disposal from the council in return. The council also directs Travellers away from contentious public spaces – like playing fields – and onto more appropriate council land in return for a longer stay for the Travellers involved.

It has been described by Gypsy and Traveller campaigners as “a no-brainer; because a zero tolerance approach means that every time a council evicts a camp – they immediately create another one somewhere else.”

The report, which covers three years of the years that Leeds City Council has used negotiated stopping, states that: "Negotiated Stopping was broadly consistent with [a total potential annual savings range of] between £190,640 and £238, 350 in local authority and policing costs combined."

Helen Jones, CEO of Leeds GATE, told the Travellers’ Times that negotiated stopping was a “locally developed method of positively managing un-authorised encampment - which has been taking place in Leeds.”

“Negotiating stopping is not attended to address the need for permanent local pitch provision for Gypsy and Traveller families, neither does it provide fixed 'transit' site provision for mobile families,” said Helen Jones.

“However it is an immediately available response to un-authorised encampment by mobile Gypsy and Traveller families which is significantly more cost effective; uses existing (police and council) staff capacity more sustainably; directly and speedily resolves issues of nuisance for local people; and, by delivering increased community cohesion and addressing nuisance, reduces local objection to much needed permanent pitch provision,” she added.

(Picture caption: a closed official transit site for Travellers in Wiltshire – where are they meant to go now?)

This year there has been an alarming rise in violence and hate towards mobile Travellers – which then affects all Gypsies and Travellers regardless of whether they ‘travel or not because of the way it is reported in the media – and that unless councils start using negotiated stopping and similar approaches, there is a potential tragedy waiting to happen.

The Labour Party came out against local authorities using ‘zero tolerance’ towards mobile Travellers in its 2017 election manifesto, and UKIP MEP James Carver has campaigned for a similar approach to negotiated stopping.

If you are reading this and you support Gypsy and Traveller rights and recognition and want to do your bit; hassle your local council to use negotiated stopping, tell your local newspaper editor that this approach exists as an alternative and will save council tax payers money, and help diffuse local anti-Traveller camp vigilante mobs forming on Facebook by posting on social media about negotiated stopping.

To read other Travellers’ Times stories about negotiated stopping please click on these links: