Ben Bennett to speak out about racism at Traveller Movement Conference 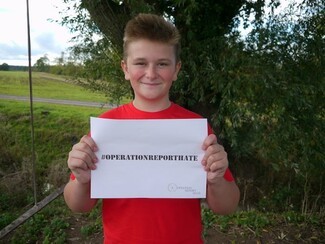 Ben Bennett, 13, the young star of Ch5’s ‘Gypsy Kids’ is to speak out about his experience of fighting racism “against my community” in a keynote speech at next week’s Traveller Movement Conference in London.

Ben – who supported the TM’s anti-hate crime campaign during National hate-crime week - will be joined by Gypsy, Pavee and Traveller campaigners, including Lisa Smith from The Travellers’ Times and education charity ACERT and Romany Police Constable Jim Davies, co-founder of the Gypsy/Traveller Police Association and regular TT contributor.

The Traveller’s Times understands that Ben will be speaking about how his family suffered from a campaign of racist hate crime that included having his pets and animals injured and killed and which eventually drove them out of a home – and why he is determined to do what he can to stop this happening to other young Gypsies and Travellers.

Politicians and top civil servants will be joining the campaigners on the main platforms, and Labour’s Kate Green MP – who has been tirelessly challenging the Government on Gypsy and Traveller concerns with questions and statements in Parliament - will be attending and speaking for the second year running.

The TM Conference – one of the largest Gypsy, Pavee and Traveller annual campaign conferences in the UK - will be held at the Resource Centre in Holloway, London, on Thursday 24TH November.

A full link to brochure and booking can be found here: http://travellermovement.org.uk/wp-content/uploads/Conference-brochure-2016_2016.11.03.pdf

Commenting on the Conference Yvonne MacNamara, the CEO of the Traveller Movement said:

“This year’s Conference is looking bigger than ever, with a range of high profile speakers confirmed. We are delighted to have equality and racism expert Lord Herman Ouseley speaking, the brilliant Kate Green MP and the cross-government hate crime manager, Paul Giannasi.

But as ever, what makes our conference so special is the involvement and input from community members themselves. This year we are delighted to have Lisa Smith sharing her experience and insight on education, PC Jim Davies on policing and Ben Bennett speaking about racism.

This is all without mentioning the workshops in the afternoon, which will cover a range of issues from education, hate crime to accessing justice.

We are really excited for the day and hope to meet many Travellers’ Times readers there!”

Ben Bennett became a role model for many young Gypsy and Traveller campaigners when he appeared on Ch5’s ‘Gypsy Kids’ which was shown earlier this year. The TT understands from Knickerbocker Glory – the TV production company - that Ben will also be in series two taking about his fight against racism. The series is being filmed now and will be broadcast next spring.