Gypsies, Roma and Travellers remember the Roma and Sinti victims of the Holocaust 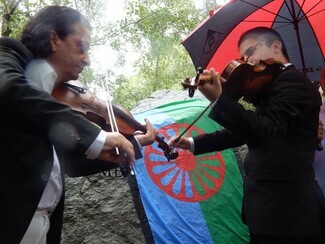 Gypsies, Roma, Travellers, and supporters met yesterday on August 2nd to remember the victims of the Nazi Holocaust in which half a million Roma and Sinti were murdered.

There where ceremonies of remembrance held across Europe, including in London, Glasgow, Derbyshire and at Auschwitz in Poland.

The events were held to mark the night of 2/3 August, the night that the Zigeunerfamilienlager, or 'Gypsy family camp', in the Auschwitz concentration and death camp was liquidated and the remaining 2,900 inmates were taken to the gas chambers and their deaths.

In London, the Gypsy Council and Roma Nation organised a remembrance ceremony at the Hyde Park Holocaust Memorial Gardens. Despite the driving rain, many Romany Gypsies, Pavee, Jews and supporters came together to remember the victims.

Roma, Romani and Jewish musicians played between the speakers and the Roma National anthem ‘Gelem, Gelem’ was played and sung.

The Travellers Times recorded Sarah Edwards and David Solomon playing ‘Oh Pavee’ – an arrangement written by the Gypsy Council’s Phien Reachtigan in solidarity with the Roma victims of the Holocaust – and ‘Gelem Gelem’, the Roma national anthem.

In Auschwitz, Poland, a UK delegation of Gypsies and Pavee people were amongst the people marking the date that the ‘Gypsy Family Camp’ that was ‘liquidated’ by the SS guards.

The trip was organised by the local Hertfordshire based Gypsy Traveller and Pavee charity HertsGATE following a last minute fund-raising drive.

The visit by the HertsGATE delegates will be covered by BBC Radio 4 in a forthcoming programme called ‘Untold Voices’.

In Derbyshire, the National Federation of Gypsy Liaison Groups held its own service of remembrance and flowers were left in remembrance.

In Glasgow, Roma, Gypsies and Travellers also came together to remember the dead.

“It was a very emotional and respectful service to remember the 2,800 victims who died at Auschwitz.”

“Candles were lit as the National anthem was beautifully sung by Sonia, we respectfully reserved a two minute silence.”

Similar events – large and small – were held across the UK and Europe.

A planned Gypsy Council demonstration outside the Holocaust exhibition at the Imperial War Museum, London, to protest about the paucity of references to the Roma and Sinti Holocaust, was called off after officials from the museum agreed to meet Roma, Gypsy and Traveller delegates. Following protests, the Imperial War Museum also recognise that a famous picture included in the Holocaust exhibition of a young girl Settella - pictured peeking out of a cattle truck during a Nazi deportation from Holland – was in fact Roma and not Jewish. The museum has since re-captioned the photograph.

The Nazi persecution of the German Sinti and European Roma living in Germany had been growing since Hitler took power in 1933. Named as a racial enemy in the 'Protection of Blood and Honour' Nuremberg laws of 1935, German 'Gypsies' were stripped of citizenship and lost their right to vote. Compulsory sterilisation of 'asocial' Gypsies had begun in 1934. In 1938, the first 'Operation Work-shy' took place with many Gypsies being rounded up and forced into municipal labour camps. In 1942, Heinrich Himmler, head of the SS, issued the Auschwitz-Erlass declaration and ordered the deportation of “Zigeuner halfbreeds, Rom Zigeuner and members of Zigeuner tribes of Balkan origins with non-German blood” to Auschwitz. Following the Nazi invasion of Russia and Eastern Europe and the Balkans the genocide of Roma people continued, often aided and abetted by the puppet regimes of the countries involved.

“We must remember the dead and fight for the living,” said Grattan Puxon from the Gypsy Council speaking at the Hyde Park event.