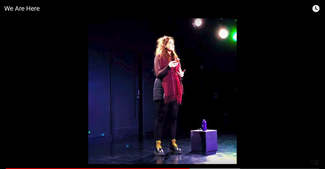 We Are Here
Play video

A livestream screening, panel ,discussion and Q&A took place on August 26th - if you weren't able to attend you can watch the whole event HERE

Depictions of Romani and Traveller women on screen is as old as cinema itself with moving images of us being projected as early as 1897 in Britain. Since then we've been used as characters to create elements of mystery, be the object of desire, possess mystical powers, or have a habit of criminality.

However, the reality across Europe is that a large number of Roma and Traveller women and girls continue to face multiple levels of discrimination in many areas of life, from health to employment and education and not only compared to the general population but also compared to Romani and Traveller men - as women we are considered one of the most vulnerable groups within, and across the European states.

Yet too often our voices have been ignored and our identities used to create a sense of 'othering', living on the outside of main stream society-  either through romanticisation or vilification of us.

In this sense, the creation of TV and Film is a political undertaking - and a powerful one - in that it determines 'who gets to represent who' - and how, shaping audience's attitudes and beliefs about who we are.

The media has a large role to play in fuelling hostility, in 2018, the Equality and Human Rights Commission (EHRC) researched social attitudes that found 44 percent of the British public openly expressed negative feelings towards Gypsies, Roma, and Travellers; more than any other protected characteristic group in society.

In the short documentary one of the interviewees, Traveller and Educationalist Chelsea McDonagh spoke out about the long-lasting impacts of the hit show My Big Fat Gypsy Wedding and the effects on young peoples self-esteem: "I think it's important for young girls to know growing up a Traveller woman is many things and that you don't have to conform to an image or stereotype of who people think you should be. I remember being 15 - I was going to college I was playing rugby I was nothing like the depictions you see in the media. Your constantly battling against it even now - that show was shown nearly 10 years ago and people still bring it up as a point of reference when talking about Gypsies and Travellers."

For our documentary TT spoke to a variety of Romani and Traveller women to see how they feel about contemporary depictions of themselves in Film and TV and explore how women are resisting stereotypes and reclaiming the portrayal of their own identities through their academic and artistic practices.

TT wants to say a big thank you to all of the women who shared their experiences and helped make this film possible.