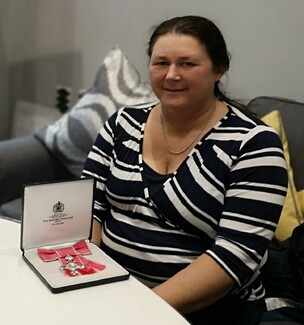 “A letter come through the letter box, but I can’t read and write so I gave it to my son,” says Kim Molney, 48, an Irish Traveller mother of four, and a Traveller rights campaigner from Leeds. Kim’s son opened the letter and said, “Mum, it’s from the Prime Minister!” Shocked, Kim Moloney replied, “Go away you eejit! What would the Prime Minister be writing me a letter for?’”

However, the letter really was from the Prime Minister, and it was asking if Kim Moloney was willing to accept a Member of the British Empire award from the Queen. Kim Moloney, who is Honorary President of Trustees for the charity Leeds Gypsy And Traveller Exchange (Leeds GATE), accepted and then went to Buckingham Palace in London to receive the award from Prince Charles, and is now Kim Moloney MBE!

“It was a good thing to get,” says Kim Moloney MBE, who sees the MBE as a collective award for the charity that she has been involved with since it opened its doors 20 years ago.  “It shows that Leeds GATE is a good organisation to have for Travellers. Because years ago there was nothing like that around here before Leeds GATE came around.”

Kim Moloney has lived in Leeds for most of her life after her mum and dad moved there when she was four or five. Kim currently lives in her trailer at Cottingly Springs Traveller site, a big public site run by Leeds City Council. Before her father’s increasing illness led Kim to move to Cottingly Springs 17 years ago, the family was living roadside.

“So the Council offered me a council house, but a dog wouldn’t live in it. I can’t live in a place like that because I get closed up with claustrophobia. It’s like I can’t breathe” (Kim mimes gasping for air like she is struggling to breathe and clutches at her throat). “We eventually got offered a slab on Cottingly Springs; one for me one for mum and dad and one for me.”

Because of her experience of Alzheimer’s within her extended family, Kim Moloney has been key in Leeds GATE’s work around health and particularly raising awareness about Alzheimer’s in the Travelling community, among the community itself, and to health professionals involved in the treatment of the condition.

Since Gate opened 20 years ago me and my aunt Eileen, God rest her soul, (Eileen Lowther, who died in 2017, was one of the founding members of Leeds GATE) used to help here and volunteer with Helen Jones (CEO of Leeds Gate) and all the women, so I just give Travellers what they need to know, I go out and tell Travellers all about GATE and I help Travellers a lot with Alzheimer’s and go to meetings with health professionals.”

“My dad used to get treatment but sometimes they were funny, they wouldn’t come and you would have a hard fight to get them to, but sometimes they would. Before he died he used to get treatment in a home, but my dad was used to being a Travelling man and he wasn’t used to being closed-up. At the end he was like a child. It’s a hard thing to watch your father go like that.”

Kim Moloney has strong views on the importance of Travelling within Traveller culture. “One of my girls is travelling now, since she got married, but she was three or four when we first moved onto site. I never want my children to lose that travelling life.

“I would like to be in Parliament and tell them: ‘would you give up your culture?’ Travellers shouldn’t go onto private property but the councils own land and they should let Travellers onto it. The Leeds roadside Travellers get skips and toilets from the council now.” Kim Moloney says that before Leeds GATE started talking to Leeds City Council and working on ‘negotiated stopping’, Travellers could get evicted multiple times a day. “I understand that there are hundreds of Travellers travelling every day, but that’s part of life. That’s the way we live.”