An Interview with Tina Cooper 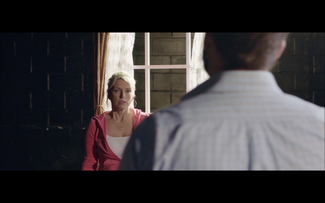 ​​​​​​​Interview with Tina Cooper, lead actress in new feature film by the Traveller Movement, Never Going to Beat You.

Never Going to Beat You is a new feature-length film about domestic abuse by national charity the Traveller Movement. It threads together the varying and different true stories of 18 Traveller women, all of whom are survivors of domestic abuse. The film was written with the late playwright and former head of acting at RADA, Jennie Buckman. It aims to raise awareness about the impact and recognise the signs of domestic abuse within all communities, not only Traveller communities.

The film had its first public screening in early March as part of Brixton Reel Film festival. You can watch a trailer and find out more HERE

We sat down with lead actress, Tina Cooper to hear more about why she got involved in this interesting new project.

TT:  Hi Tina. Many thanks for speaking with us today.

TT:  Can you tell us a little bit about this film?

Tina: It’s a story about a woman called Moira, who falls love with and marries a 'charming' man who turns out to be a violent, domestic abuser. The film documents her life from when she met him: from the good, to the bad, to the ugly. It threads together aspects of all the women’s lives or experiences of loved ones and friends. Some of the women including myself first performed it as a play to a packed house at the Blue Elephant Theatre, London in 2016. The reviews were fantastic and it generated a lot of interest. We made the film version last November 2018 with Jennie’s son, Michael Buckman (Crispy Biscuit Films). We filmed it all in the space of 2 weeks, and we’re very proud of it. It was a labour of love for us all.

TT: Can you tell us more about how this film come about?

Tina: The Late Jennie Buckman from Giants Theatre came in to the Traveller Movement office one day and asked if she was to do a piece on Travellers what would be the best thing to do. I said domestic violence as I was going through a divorce at the time and it was on my mind that day. Me and the other girls had a chat with her, and told her a bit about our pasts. I told her my life story, and she wrote it all down. Then she came back with a play, and asked if we would perform it. We said yes, and we got so much good feedback from the play, and it was so powerful, we were asked to turn it into a film. And now I’m writing a book!

TT: Why is this film important?

Tina: Because same as all communities, domestic abuse is very big in the Traveller community and we need to break the shame barrier, because deaths are happening because of domestic abuse, as well as suicides. Domestic Violence is taboo for many Travellers. At the Traveller Movement, we wanted to let Gypsy, Roma or Traveller woman know there’s nothing to be ashamed of if they are experiencing domestic violence, or want to get divorced. Travellers are ashamed of a lot of things, one of them being divorce. It’s still very frowned upon to get a divorce. But I’d rather be divorced than dead.

Travellers are ashamed of a lot of things, one of them being divorce. It’s still very frowned upon to get a divorce. But I’d rather be divorced than dead.

TT: What do you hope people take away from the film?

Tina: Hopefully it will make young, naïve girls and women aware of how dangerous domestic violence can be. It can start with a slap, and end up in a coffin. Domestic violence is not just being hit; it’s controlling, it’s telling you what to wear, who you can talk to, where you can go, how much money you can have, who you can see, you’re basically a robot for a man. And it just gets worse the longer it goes on. So I hope for other young Traveller girls they’ll see it and seek help. There’s no shame in seeking help at the first sign of domestic abuse. Help is there – all you have to do is ask. If you’re not sure, where to go, just contact me or one of my colleagues at Traveller Movement, and we can point you in the right direction.

Domestic violence is not just being hit; it’s controlling, it’s telling you what to wear, who you can talk to, where you can go, how much money you can have, who you can see, you’re basically a robot for a man. And it just gets worse the longer it goes on

TT: Who do you hope will see this film?

Tina: All professionals who need to be educated in Travellers’ needs. i.e. social services, the police, probation services, schools, social workers, health visitors, even dentists, priests, staff at children’s centres, midwives, prison staff, schools teachers, mental health professionals, medical staff. Most of all we want victims to see it. We want them to know they’re not alone and perpetrators, to see how serious it is. We want people who are fleeing family domestic abuse for being LGBT to also see the film. There’s help out there for them too.

Tina Cooper is the women’s project worker with national charity the Traveller Movement.

The National Women’s Aid website https://www.womensaid.org.uk/ and local support service websites, including Solace Women’s Aid https://www.solacewomensaid.org/  all offer confidential support via their websites along with advice on 'how to cover your tracks online' and an ‘escape button’ so you can quickly exit the website safely.