I am too young to be 'your Gypsy' 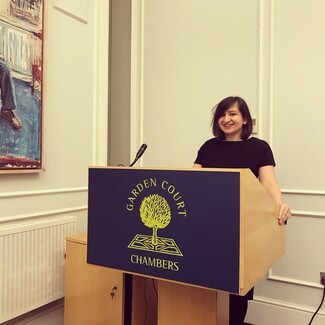 Everyone has an important role in modern day societies to challenge the stereotypes of Gypsies, Roma and Travellers ... says aspiring Roma barrister Brigitta Balogh.

Everyone has an important role in modern day societies to challenge the stereotypes of Gypsies, Roma and Travellers, regardless of nationality, we all have a collective responsibility. Furthermore, it is the duty of Romani people to preserve their identities and I acknowledge that it means something different to every single one of us, as we are Europe’s biggest and most diverse minority group!

I was brought up with my mother and my siblings in a small village called Simonfa in South of Hungary. Before starting primary school, my mother told me that I had to study twice as hard than any other child in the classroom. Her advice has stuck with me since. I knew from a very young age that I wanted to become a lawyer, because I wanted to help vulnerable people to provide a platform for their voices to be heard, to deliver justice to them.

At the age of 14, I moved to Budapest to start my secondary education in a Christian high school. Shortly after my final exams, I moved to the Netherlands, where I spent a year volunteering in the Hague, working with disadvantaged children living under poor socio-economic conditions. After finishing my undergraduate degree in Wales, I moved to Denmark to start my Masters degree also in law. I currently reside in London and I am studying to become a barrister in England and Wales.

While living in Hungary, people often told me that I was not like other Gypsy people. What they meant by it is that I did not embody their stereotypes about Gypsy people, therefore instead of changing their views, they isolated me in their heads. Therefore, I decided that just because I am not the Gypsy fulfilling the stereotypes in their heads, it does not actually mean that I am less of a Gypsy.

I planned to pursue a career abroad to avoid my professional achievements to be undermined by my ethic minority background. However, soon I had to realise that there is no degree that I can use as a shield to protect me against stereotypes, generalisation or even discrimination.

Moving abroad helped me to understand that I am the sole person who can determine my identity and what it means for me to be a Gypsy. I believe that being a Roma has enormous value – just like any other nationality or minority- and this is the narrative we need to strengthen.

Right now, while studying, I actively speak about the Gypsy Roma and Traveller situation in the United Kingdom. By way of example, I write blogs at Travellers’ Time regularly alongside Professor Colin Clark. I am also currently co-authoring an academic journal article titled ‘Hidden communities: Justifying the inclusion of Roma as an ethnic identity in Census 2021’ with Nicola Hay from the University of West of Scotland.  In addition, 2018 saw the publication of my open letter to Lord Bourne requesting law reform. Furthermore, I often participate in panel discussions and conferences and recently delivered my first legal talk. My long-term ambition is to be able to influence laws ands policies with my work as a legal professional that will better serve the communities. I also wish to advocate accessibility to justice and consider the effects of socio-economic disadvantage.

This post was written by Vivien Balogh, based on a conversation with Brigitta Balogh.

First published on the Roma Heroes website and republished by the Travellers' Times with permission.