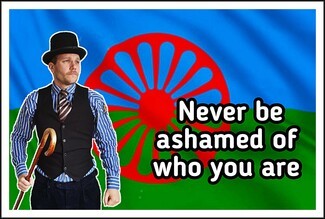 To everyone Tyson Fury winning was an inspirational story. To Gypsies, it was so much more.

As a child you are not allowed to play with certain other kids because their parents don't like Gypsies.
As a young man you are refused service in a pub because 'Gypsies are banned'.
As an adult you watch Television present fiction as fact (people ask you is it true you find your wives by kidnapping girls?).

Your cousins can't get job interviews yet when they put a different address with the same CV they get an interview.
Every time something is stolen, Gypsies automatically get the blame.
Every time Police talk to you they automatically assume you're the guilty party.
You're called 'Tax dodgers', 'Dirty Gippos', 'Pikeys'.
Gypsy Suicides are mocked on social media.

Society tells us Gypsies are the bad guys, Hatred towards Gypsies is the last acceptable form of racism.
Last night Tyson Fury became the biggest star in Boxing, he became the most talked about man in the world.
Last night a Gypsy became a national hero.

There will be young boys with a poster of a Gypsy on their wall.
There will be professional boxers 20 years from now saying a Gypsy inspired them to take up the sport.
Nobody should ever have to hide what they are and now we can say yes we are Gypsies and our people have the Heavyweight Champion of the World.

Our Champion has become the WORLDS Champion, both in the ring and out.
Even in this highly charged post Brexit World there is no room for Prejudice or Racism. Be proud of what you are and don't let society judge you based on racist views.

-A Gypsy from Hereford

Romani filmmaker Charles Newland made a documentary for Travellers' Times about Christopher Royles called 'Wrestling with my roots'. Charles will be hosting a screening followed by a Q & A  as part of Borderlines Film Festival in Hereford. For more information visit: https://borderlinesfilmfestival.co.uk/film/grt-film