A blinding bit of telly 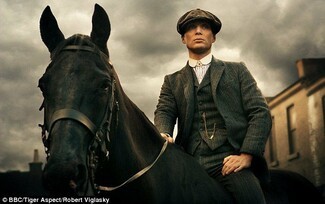 It feels like everyone’s talking about Peaky Blinders. About time, too.

For years, the best television dramas I’ve seen have been set in three places: America, Scandinavia, and Westeros. The last one's not just far from here, it doesn't actually exist. How great then for it to be acknowledged that England has been home to a parade of bad girls and worse boys as colourful, complex, charismatic and ethnically diverse as the ones from East Orange, New Jersey, or the mind of George R. R. Martin.  We’re getting stuck into our own history through drama, for a change, and it’s brilliant. It’s also just been announced that Peaky Blinders will be back for another year at least. So long live the lads in the Stetson caps and the velvet-collared Crombies, giving us a kicking to remind us of our soot-covered past.

Sharp-tongued Clerkenwell Italians. Hard-case Camden Town Jews.  De-mobbed Black Country boot boys. A West Indian Brummie preacher with a pocketful of secrets (memorably played by Benjamin Zephaniah): they’re all here, and none of them are making any apologies for that. And this isn’t Thatcher’s Britain: this series is set a good 90 years ago, in the immediate, haunted wake of the First World War. It’s exciting- exhilarating, even- to see the reality of Britain’s diversity laid out so powerfully, stylishly and unapologetically. It may be no secret that modern America was built by the hard hands of immigrants, but in Britain, we’re cagey about the subject. Our history is very different, but it’s just as complex, and a perfect stage for great drama.

That’s before we even get to the Gypsies.

The way Gypsy and Traveller characters are presented in film, television and theatre is a subject you could write ten books about, never mind one. Maybe I’ll do that one day, actually, and exorcise my million-and-fifty-odd criticisms of how it’s usually done. But in the mean time, I’ll stick to a few words about why Tommy Shelby might be the most important fictional Gypsy character since Emily Brontë’s Heathcliff.

First things first: Tommy’s cool, and Tommy’s the leader. He’s wrapped round the finger of no-one, and if you think he’s wrapped around yours then you’re probably in for a shock. This is not to say that he has no parameters, no boundaries: a main man with limitless power would bore us all to tears, which is why Superman needs his old kryptonite. Tommy is a complex protagonist whose most trusted advisor, and keystone of moral authority, is his female cousin Polly- ingeniously played by Helen McCrory- in a Britain still ruled by iron patriarchies when most women were still some way from having the vote.

Like Heathcliff, Tommy is a character whose Romany ethnicity is acknowledged by the author as fact- and a fact that plays several crucial roles in the plot. Sure, there are old wagons and coloured horses about, and there’s the odd bit of Romany language (one of the only let-downs is when Tommy goes to see “Queen” Mary Lee and they have a full-blown conversation- inexplicably- in Romanian, a language which English Gypsies do not and never did speak). But what marks Heathcliff and Tommy Shelby’s characters apart from many other fictional Gypsies is that their “race” is not used as a cheap bit of colour, supplanting the need for genuine characterization. They transcend their heritage as fully realised humans with brilliant, intricate minds; great powers and flaws whose charismas rule over their dark and sodden domains.

It’s extremely rare for Heathcliff to actually be played as a Romany. Ralph Fiennes took the character’s ethnicity seriously and gave an intriguing performance opposite Juliet Binoche’s Catherine in the 1992 Peter Kosminksy version, but actual “Gypsy Heathcliffs” have been pretty rare. In general, critics see Heathcliff’s “Gypsyness” as far more ambiguous than, say, Shylock’s Jewishness, the fact that Othello was a Moor, or that the Earl of Grantham is probably English. He is called a Gypsy at several key plot points, and said to speak “some gibberish that nobody could understand”: that settles it for me. He is, however, also called “a little Lascar, or an American or Spanish castaway”. So yes, there’s just enough room to doubt what Brontë meant, if it’s too hard to believe one of the greatest characters in the English canon might actually be one of us lot.

Tommy Shelby, on the other hand, is clearer about who he really is, but not so clear as to make things boring ("I'm not a Gypsy like you mean", he says to a lover at one point). He’s also a dab hand at mocking-anti-Gypsy prejudice. When an auctioneer sneeringly asks him what he does, his answer is “Import and export. But I also sell pegs, and tell fortunes”. At the beginning of the first series, the Lee family acknowledge that Tommy's father was “from good people”, but they strike back with the claim that his mother “was a diddykoi whore”: interestingly, things calm down a bit when Tommy ends up being related to the Lees by marriage, which may not tally exactly with some Travellers’ actual experience. Never mind that: Tommy finds himself in a situation with general and frequent historical precedent. While some Gypsy families look down their noses at him as coming from an inferior “breed”, you can usually be sure someone’s a Romany if their enemies won’t let them forget it.

Tommy’s fellow do-badders Billy Kimber (played by Charlie Creed Miles), Alfie Solomons (Tom Hardy, with a half-radged glint in his eye) and Darby Sabini (whose revved up criminal pathology is brilliantly realised by Noah Taylor) love to remind him what he is, and exactly how they feel about it.  “Diddykois”. “Savages”.  “F***ing Gypsy b*****d”: like any Traveller, hearing these terms makes my blood boil, but it was still a relief to hear the way people actually talk about us in all its anti-glory. “Pick it up, pikey,” says Kimber, after flicking a coin at Tommy to mock him as a Gypsy beggar. If you haven’t seen it yet, you might hope he gets his comeuppance. I did.

I was once discussing, with some other writers, what makes a truly great character. I remember thinking that it’s not just about them being complex, being someone you can describe as many things: Tony Soprano, for instance, is a gangster, murderer, liar, adulterer and vicious bully; but also a Catholic, father, unloved son and amateur ornithologist. A great character shows how human traits and flaws, qualities that seem contradictory, can and do flow through the life of a single person.  As the English poet Keith Douglas wrote: “here the lover and killer are mingled / who had one body and one heart”. And, shocking as it is for some people to realise, Gypsies and Travellers are simply a people as flawed and complex as everybody else. And if you’ve got a problem with that, you can take it up with the Peaky Blinders.