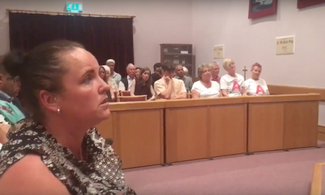 A Romany Gypsy campaigner ambushed the Prime Minister with questions on hate crime and Gypsy and Traveller rights at an election hustings in Maidenhead.

Sherrie Smith, from Gypsy and Traveller lead campaign organisation Herts GATE asked Theresa May, at the hustings at the Methodist Church in Maidenhead on the 27th May, about what was in the Conservative Party election manifesto that would help the UK’s Gypsies and Travellers on education and planning.

Sherrie Smith also raised the increasing number of hate crimes against the community being recorded by Herts GATE’s ‘Report Racism’ project and pointed out that a former government minister – Eric Pickles – had been found to be “racist” on determining Gypsy and Traveller planning applications by the High Court.

Sherrie Smith was at the “carefully managed hustings” – at which only “pre-prepared questions” where officially allowed – to support her brother Bobby, who is standing as an Independent candidate for the constituency on a single issue about fathers’ rights.

“I never planned to go to the hustings,” Sherrie Smith told The Travellers’ Times.

“My brother is standing as an independent and I just went with Bobby for the experience. We didn't really think she would turn up at this little church so soon after Manchester tragedy. There were not many people outside and we were at the front of the queue,” she says.

“When we walked in first, we sat in the front-row only six feet from stage. The panel of candidates was made up of UKIP, the Liberal Democrats, Labour and The Green Party and they were answering pre-prepared questions only. But after 90 minutes an anti-fox hunting protestor heckled from the back and Theresa May and the hustings chairman allowed the unprepared question.”

“I suddenly thought I have got say something”

“I suddenly thought I have got say something, it's a one-off chance to challenge the leader of the current government on their record with Gypsies and Travellers.”

“I quickly formed and typed a question in to my notes on my phone so I wouldn't stumble if I got a chance,” says Sherrie Smith.

“I just waited for the pause for next question n blurted it out. I live streamed it to Facebook. It was surreal. I just knew I couldn't go home without asking her straight.”

Sherrie Smith says she chose a hate crime question because she was “sick of watching my children come home upset after being called names, sick of reading public figures insulting me, my predecessors my culture and my beliefs.”

“I was one of those who marched round Parliament Square in London last May at the Dosta Grinta demonstration. I helped to get thousands of signatures - all the organisers and supporters did,” says Sherrie Smith.

“As part of my role as project manager for Herts GATE, we have written to the Prime Minister and MPs raised questions in parliament, visited local MPs, and councillors, campaigned, given speeches and nothing makes a difference, they do not even acknowledge our plight.”

It's time to stand up and be counted - if I can do this anyone can. Go to your hustings and ask your MP’s: ‘What will you do for my Gypsy Traveller Vote??’ Email them, or phone them, and just let them know that you are watching them and you do want to make your vote count.”