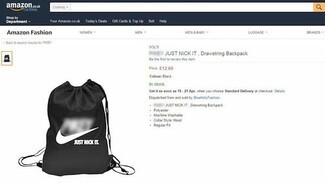 Young people have reacted to NIKE’s promise to investigate the “misuse” of its famous Swoosh logo and name after campaigners revealed that hundreds of products mimicking its brand to spread race-hate about Gypsies and Travellers were available on major online marketing websites.

NIKE promised to “investigate” the misuse of its name after Gypsy and Traveller campaigners prompted a BBC Newsbeat investigation which revealed that hundreds of items of racist merchandise - including rucksacks, hoodies and baby-grows, emblazoned with the words ‘p*key: just nick it’- were available for sale on eBay and Amazon.

Jason Smith, 21, from Worcestershire said that the racist merchandise had “been around for years” and that action by NIKE was “long overdue”.

“I know some Travellers who wear the T-shirts at home to try and take back control (of the racism) in humour,” said Jason.

“I wear NIKE and think that a promise of investigation from them is long overdue,” he added.

NIKE waded into the growing controversy after Dr Hazel Marsh, a tutor from the University of East Anglia and herself a Romany Gypsy, complained to them because she was alarmed that the racist merchandise would encourage race-hate towards Romany Gypsies and Travellers.

In an email seen by the Travellers’ Times, NIKE replied and thanked Dr Marsh for alerting them to the “misuse” of their brand and have told her that they had passed the complaint to “the relevant department” who “will investigate the matter further.”

NIKE added that they “respect and appreciate every one of our consumer's no matter what their race, age or gender is.”

NIKE later confirmed in a separate statement that an investigation was going ahead.

The UK’s Romany Gypsies and Irish and Scottish Travellers are protected under equalities laws.

Wayne Smith, 17, from Ammanford in Wales said that that when he saw the racist merchandise he was “truly disgusted”.

“I had heard about the racist merchandise,” said Wayne, “but thought that surely they wouldn’t be able to be listed or sold on sites as it is racist towards our culture.”

“Young children wear NIKE products and this could influence them to think that Gypsies and Travellers are actually thieves.”

Wayne said that he wore NIKE himself but that if they didn’t take action he would stop. However, he added if NIKE did take action “a lot of Travellers and Gypsies would be grateful.”

Ben Bennett, 13, from Nottinghamshire, also said that he had known about the racist merchandise for a long time.

“I was catching a bus and there was a man sat at the back wearing a p*ikey - just nick it t-shirt,” he told Lisa Smith, the Traveller’s Times Youth editor.

“It makes me feel like is this what people think of me,” he added.

“Will I always just be seen as a p*key that just nicks things?”

However, Ben said that NIKE’s decision to investigate the misuse of its brand sent out a strong signal to racists.

I wear NIKE clothes, they are a big company, and I’m really pleased it’s being investigated because it will send the right message out,” said Ben.

“If the N word or P word were on these it would simply not be tolerated or accepted,” he added.

Anastasia Bennett, 14, from Nottinghamshire said that the racist merchandise had made her feel “devastated and upset.”

“I was on eBay buying make-up and I came across a book called ‘P*key’ and then the T-shirt ‘p*ikey - just nick it’ T-shirt and it made me feel devastated and upset,” said Anastasia.

“This wouldn’t be allowed for any other ethnic minority, we have been in this country for hundreds of years, but were still treated like aliens,” she added.

“I think it is a good thing NIKE are taking it seriously, people don’t realise the damage that is being done by wearing a T-shirt saying this.”

Hundreds of listings have already been taken down by Amazon and eBay.

However, Sherrie Smith, a Gypsy and Traveller activist who helps to run HertsGATE’s ‘Report Racism’ website said that more needed to be done.

Sherrie Smith told the Travellers’ Times that after all the racist merchandise was taken down from then Amazon website – the Romany flag appeared for sale and was tagged under ‘p*key’.