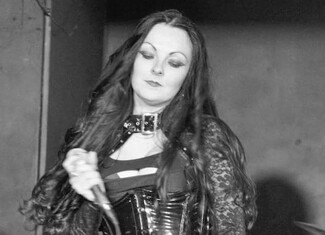 Sakara says that the single ‘Olde Ways’ is a “homage to Romani peoples wherever they roam”.

Sakara – the stage name for musician and singer Laura Marshall - is a rock singer with attitude hailing from Herefordshire and comes from an English Romany Gypsy family with a long line of talented storytellers and musicians.

Laura Marshall began singing from an early age to her first audience as part of a local choir, and since has continued to write and perform in various bands and projects.

‘Olde Ways’, by Laura Sakara Marshall and Stephen Thomas Clarke, was produced by FractalSoup Studio and was released on August 12, 2016.

The single can be heard and downloaded by following this link.

Peaceful nomads from a far away land

Borrowing the earth as they travelled around

Taking no more then what was needed

A people of natural magic and healing

The Romany Gypsy is of my blood

I hear the voices of my ancestors scream

Keepers of nature we once roamed free,

We lived in woodlands on the road and hills

We sing and dance the mystery,

We are all the world had never seen

and you may never see again