Travelling in Hope for Lillymarie 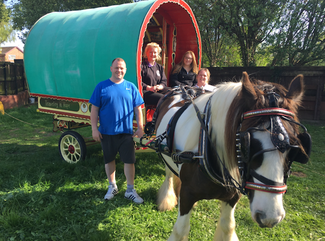 Romany Gypsy girl Lillymarie Williams will be spending the summer travelling around Anglesey, Wales, in a bow-top wagon raising money for a hospice for children.

Most young people look forward to the summer break to be able to relax, catch up with friends or even have a part time job.  Not Lillymarie from Llanfaes, a small village on beautiful Angelsey, North Wales.  Every day between 30th July and 27th August Lillymarie, 15, will be going on a journey with a difference round the Anglesey, which is by far the largest island of Wales and the fifth-largest island surrounding Great Britain

Travelling on her restored Bow Top Gypsy Caravan pulled by her horses and accompanied by Jack Evans and family, they will be raising money for Hope House/Ty Gobaith a local children’s charity very close to her heart.   This near month long journey is called ‘Travelling in Hope’ Lillymarie is dedicating her fundraising event to her best friend Courtney Rose Jones who sadly died aged 14 and was supported by Hope House/Ty Gobaith

Lillymarie is collecting sponsorship at various places in Anglesey including the Anglesey Show who have very kindly donated a stand for the Bow Top Wagon to be shown all towards the local children’s hospice.

Katrina Lawson, Area Fundraiser said: “We are delighted that Lillymarie and her family and friends will be dedicating their summer by supporting the children and families that we look after.  We’re a local charity that cares for children with serious conditions, who aren’t expected to live longer than early adulthood.

She continued: “We help them enjoy the best possible quality of life and be as comfortable, happy and fulfilled as they can. We support their parents and families too, who often find it hard to cope. All our services are free, but to carry on funding them we need to raise over £6 million every year for the both hospices- almost all of it through the local community.”

Lillymarie spent last summer travelling around Wales in a traditional Gypsy wagon with Esmor Davies, her Grandad and the rest of the ‘Travelling Under the Stars’ team. Lead by “madcap fundraiser” Esmor Davies – a civil engineer who once drove a JCB from John O’Groats to Lands’ End to raise money for the blind - the team completed a 200 mile route through North and mid Wales over an 8 week period with six Gypsy caravans and 10 horses. Lillymarie helped the team collect donations as they travelled, and the team raised twelve thousand pounds to help fundraise for a Cancer charities and hospices.

Support from Travelling in Hope is the bread and butter that Hope House needs to survive, anyone who is able to sponsor Lillymarie can visit her fundraising page at www.justgiving.com/travellinginhope or if anyone is able to donate a support vehicle for the cause to get in touch with Katrina on 01492 596 581