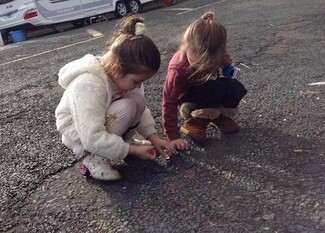 Above: Travellers in Leeds have called a negotiated stopping scheme "a beacon of good practice"

A Leeds-based project intending to end the cycle of unauthorised encampment, eviction, stress and mess of ‘zero-tolerance’ approaches to roadside Traveller encampments has been given a thumbs-up by Leeds Travellers.

The new ‘negotiated stopping’ scheme involves temporary agreements between a group of Leeds Gypsies and Travellers and Leeds City Council that allow the Travellers to camp for up to three months on specified areas of vacant council land. In return, the Gypsies and Travellers sign a contract agreeing to keep the area clean and to move off at the end of the agreed period. The project also has the support of Yorkshire police who say that the new scheme is a “win-win” situation that saves money and resources and allows them to engage with the negotiated sites using a local community policing model – the same model that is used for the neighbouring streets and estates.

Helen Jones, CEO of local charity Leeds Gypsy and Traveller Exchange (Leeds GATE) says: “Leeds has become a beacon of good practice for managing unauthorised encampments which is now being emulated around the country from Kent to Cumbria. The ‘negotiated stopping’ programme has saved at least £100,000 and considerably reduced nuisance and anti-social behaviour associated with Gypsy and Traveller camps.”

The experiment follows a 2010 council scrutiny committee inquiry into the issues faced by local Gypsies and Travellers. People from local roadside Traveller families gave evidence to councillors and local Gypsy and Traveller charity Leeds GATE recommended trying a negotiated approach. It took several more years of negotiation and hard work from Leeds GATE and Leeds City Council to turn the idea into action.

A Leeds City Council spokeswoman said negotiated stopping agreements “helped to reduce the number of encampments in 2012-13 and the impact on local communities of unauthorised encampments”.

Valerie Elliot is a Romany Gypsy mother who lives roadside in the Leeds area and is an Executive Board Member of LeedsGATE. She is relieved that negotiated stopping has finally become a reality.

“We would sometimes be moved up to two or three times a week and its worrying that my children would often go to school but not know where they would be coming home to,” she says.

“The first site was not ideal because it was an industrial area and a red light district, but it was better than being moved on and moved on. My daughter was sitting her GCSE’s so it was a lot easier for her to concentrate going to school from a secure site.”

She explains that the Travellers each sign an agreement with the council promising to keep the site clean, not to light big bonfires and to move to a new negotiated site after three months. In return the council provide a skip, toilets and promise not to use their eviction powers whilst the agreement runs.

The first move encountered a few hiccups because the second designated site was not ready but eventually the Travellers moved onto the grounds of a disused school next to the agreed sit in the heart of a heavily populated residential area. The local councillors came to meet the Travellers, Okayed the move and the contracts where signed and sealed.

“We had no problems again at the new site,” says Valerie Elliot. “We kept ourselves to ourselves because we didn’t want to attract the wrong sort of attention, but we kept the site clean and just got on with it.”

In fact, a local settled neighbour contacted Leeds GATE to express his support.

“Seeing this group at close quarters for two weeks has made me envious of their close knit community. I’ve got a handful of good friends but these people really seem to care for one another in more practical ways than most people who live in houses,” she wrote.

Leeds GATE, Leeds City Council and representatives from Yorkshire Police have been holding conferences highlighting the benefits of negotiated stopping in a bid to promote the project as a good practice model that can be used by other councils. Representatives from nearly fifty different councils have attended one conference in Birmingham and another in Leeds itself. A neighbouring Council now has a negotiated site agreement with a local Traveller family.

The only fly in the ointment is the looming May council elections which mean that currently, Leeds council officers and the Travellers are finding it hard to bring elected ward councillors on board and negotiate another agreement. Helen Jones believes that this is because the councillors are scared of losing votes if they are seen to be ‘soft’ on Travellers or of being opposed by other councillors playing the “Gypsy card” if they do agree to a temporary site.

The Traveller families have now moved off the second site on the disused school but are parked up on an unauthorised roadside site as there was nowhere else for them to go when the last agreement ended. Meanwhile the negotiation between the Travellers, the council and local councillors on a suitable negotiated site to move to goes on. This is frustrating for the Travellers as they have abided by the agreements and kept their side of the bargain but Helen Jones is determined that the project will survive  and overcome initial “teething problems” and that the council will not fall back on the “expensive and wasteful shift’em; shift’em zero-tolerance approach”.

“Negotiated stopping has developed a dialogue and mood of co-operation between local authority officers and families on the roadside camp. The families on the camps genuinely want to continue a peaceful way of life without causing undue distress to their fellow Leeds citizens,” she says.

“They don’t want to return to the old haphazard merry-go-around of camping in unsuitable locations and being rapidly evicted with no services. Yet sadly, despite the admirable efforts of some within the council, not all elected members are playing ball.”

Valerie Elliot hopes that it settles back down after the election and has this message for Leeds City Councillors: “We are not as bad as you make out we are,” she says. “Everybody obeyed the rules, there was no rubbish and the local shops were glad for our trade.”

Stephanie Knight; Youth Inclusion Co-Ordinator at Leeds GATE, says: “The site where the Travellers are now is ideal for a negotiated stopping place. It’s on a disused road yet near a residential area and it’s safe. I haven’t heard any complaints from their direct neighbours. They are causing no problems. It’s a shame that they have to move.”