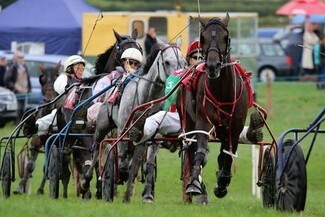 “There has been a family connection with trotting since the 1920’s. Travellers’ make up around a quarter of the competitive trotting population”

The Travellers’ Times’ Chris Smith talks to Richy Evans (or Richy-Boy Evans), 36, from Herefordshire, about the competitive sport of trotting - or horse racing with carts or a sulky. A sulky is a light two-wheeled single seat cart. The horses used are called ‘standard breds’. This breed was developed in America from British bloodstock. Trotting takes place all over the Country on permanent racetracks that were made for trotting and also in fields where the track is created for the day/event.

How long has trotting been around?

Trotting has been around for centuries. The first recognised harness race took place in the 1700’s, when the horses did not race against each other, instead it was time trialled and the horses had to complete one mile in under 2 mins 30 seconds. This was classed as a harness race. It was often tradesmen returning from church on Sundays that began racing regularly in the 1800’s. The oldest documented race meeting dates back to the 19th century.

How often do races take place?

The season traditionally begins on Easter Monday with the oldest (run since 1884!) meeting in the calendar at Llangadog in Carmarthenshire, South Wales. Race meetings are held every weekend until the end of September, while mid-week evening meetings are held regularly during July and August.

How did you become involved with trotting?

There has been a family connection with trotting since the 1920’s, however the majority of people racing in Wales are farmers and tradesmen. Travellers’ make up around a quarter of the trotting population.

What are the restrictions/Challenges around Trotting?

Competitive road racing is illegal. This is for the safety of all road users, and also for the safety of the horses. Racing on tarmac or concrete can cause health problems for the horse, it can cause stress and strain on joints and tendons especially in older horses and can aggravate hoof problems.  The UK has five permanent ‘cinder’ tracks. These are all weather tracks that are scientifically analysed to get the best ratio of surface hardness to possible damage for the horse. The majority of races takes place on grass tracks.

What would your response be to those who oppose the sport?

Harness racing is a rural sport that has taken place for centuries. The horses are treated well, as if they are part of the family. At races the stewarding team monitor animal welfare and conduct inspections before and after the race. Accidents are rare. Competitors and horses are required to take a competency test before competing.

What do you do to ensure the success of a race meeting?

We work closely with the Mid-Wales and Border Counties Racing Association (The only independent racing association in the UK) and also the British Harness Racing Club, The Jockey Club and The British Horse Racing Authority. On a local level we contact and work closely with the police and local councils and inform them that events are taking place to ensure that traffic regulations and access issues are taken into account and sorted out. We also have to ensure that bar and gambling licences are sought as well as arranging liability insurances. Historically tracks existed in pretty much every area of the country, but due to changing farming practices fewer places now have tracks that can be used.

What do you see the future of trotting looking like?

The future of the sport looks good. Changes and developments are taking place that reflect what the public wants from this type of event. There is excellent integration between Travellers and Gorgios.  The best trotting horses competing against each other will always be key to the sports success.