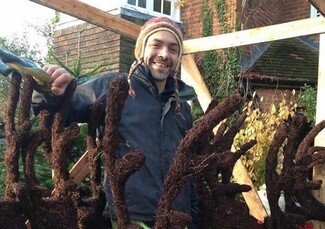 After steering the TT safely and skilfully through four years of sometimes challenging change, Damian has stepped down as Editor and is off to pursue his writing and poetry career. Without Damian and his small team of Julie, Charles and Lucy at the TT editorial office in Hereford and the bloggers and writers who send in news articles, films and features, the TT may well have folded. Damian is still very much with us on the Travellers' Times as a consultant and keeping an eye on things right across the project, but I am the new Editor.

Of course it’s not only the staff and writers that keep the TT going, it’s also you, our readers, listeners and viewers. We can beaver away at TT and produce the most well-crafted and exiting news pieces, the best short interview film ever made, prize winning investigative and campaign articles, and the most heart-warming and empowering feature, but with no one to read or watch or listen to them it’s all a bit pointless. So thank you. Without you we are nothing. We really are all in this together.

Some of you may know me through my work for the Traveller Movement, through my previous articles and training for the TT, and through my published work in the mainstream media, but for those who don’t here is a brief bit of background:

I am first and foremost a professional investigative journalist, with reams of published work, a background in campaign work, qualifications in media law and media production and all the nitty-gritty stuff like that which editors need to know, and, as the Campaigns and Press worker for the Traveller Movement, I also have a lot of experience of working in a team that challenges discrimination and racism against Gypsies and Travellers by winning real victories for real people. If you search online, you will find news stories in the national press about some of the stuff that I was involved in, including the two year discrimination case against Wetherspoons, the public exposure of the racist secret Facebook group for serving and retired Metropolitan Police Officers, the campaign to stop Channel 4 defining who Gypsies and Travellers are through their mocking Big Fat Gypsy Weddings TV programmes, a High Court action against the TV regulator Ofcom, and a complaint that received world-wide media attention against the BBC and Top Gear for their despicable attempts to normalise ‘p*key’ as an acceptable form of abuse. If it’s OK for Jeremy Clarkson and the BBC, then what hope have our children got against the school bullies? Challenging the prejudice and racism in the papers and on TV is vital work.

So that was then - but this is now. I actually joined the TT team at the start of November, so I have already been here a month, and I am looking forward to continuing into the next year and leading the TT through another chapter in its long and illustrious career.

We have already covered quite a few stories that have been published Online, including a grass-roots Catholic Traveller aid to the homeless initiative, a conference for serving Gypsy and Traveller Police Officers coming together to fight racism in the police service, a Gypsy and Traveller lead local media response group in Dorset, a charity offering grants to families with disabled children, the amazing old family photos of Sylvie Harrison, planning law blogs by the legal experts from Community Law Partnership and Garden Court Chambers, the sad passing away of veteran campaigner Donald Kenricks, and an interview with Lisa and Jade Smith, two amazing and high achieving Romany Gypsy girls. We aim to continue to publish at least four times a week on the TT online. Some of these stories will also appear in our next twice-yearly Magazine for all of you who prefer to get your news and views and pictures on paper.

I am going to sign off now because I need to write up another story to publish in the news section of our website. It’s about Mike Linfoot – a brave Romany Gypsy man and a friend of mine – who has just forced the mighty Daily Mail to apologise and pay substantial damages for falsely calling him a liar in a scurrilous article they published over a year ago. Well done Mike – and your legal team from Howe & Co and the Traveller Movement - for doing your bit and showing the big beasts of the mainstream media that what is often called ‘the last acceptable racism’ is no longer acceptable.

My next editorial will cover where the Travellers Times’ is going next year and there will be a lot to say. We will have the results of our current reader’s survey to consider, a big media workshop to announce, the continuation and development media skills training programme, the launch of a vital media response team ready to give comment to the mainstream media on national and local Gypsy and Traveller issues, and – of course – a multitude of interesting, important, heart-warming, courageous and informative articles, pod-casts and videos featuring you, your views and your news.

So stick with us. The Travellers Times Online will be publishing stories several times a week and the next free Magazine is in March, so sign up to our social media and email alerts, register for the magazine and our e-newsletter if you haven’t already, and follow us on Twitter and Facebook. The next year is going to be interesting to say the least.

In the meantime, please take part in our TT Big Reader’s Survey and you may win £200 our prize draw! https://www.surveymonkey.co.uk/r/TT-Big-Survey