Stateless Roma in Ukraine have nowhere to turn to 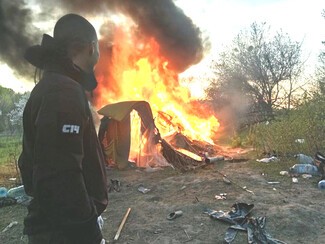 Amidst escalating violence and racism, Roma are looking west to neighbouring countries in an effort to escape persecution.  Romany activist Jonathan Lee reports on the predicament facing Stateless Roma, who are caught in an impossible situation with no obvious way out.

According to a new report, up to 20% of Ukraine’s Romani population are stateless - that is, they are without identity documents such as birth certificates, passports, or identity cards which prove they are citizens. The lack of evidence to prove their nationality means these Roma are denied access to basic services such as healthcare, education, housing, and welfare, as well as to regular employment or for some, even something as simple as a mobile phone contract.

After a series of organised attacks on Roma by far-right organisations in the past year, most of the country’s Roma who regularly spend the summer working in the major cities have now returned to their home region of Zakarpattiya on the South Western border. Whilst reports of fresh attacks came in over the summer, Roma living in settlements in Beregovo and Uzhgorod began to look abroad for the vital work which they needed to survive; work they were being denied by the far-right militias whom had driven them out of the cities.

“When I was collecting metal I could earn up to seven or eight hundred hryvnia a day, if we were lucky maybe even a thousand a day. Here I can only make two hundred” said 36-year-old Oleg Bogdan from Beregovo. He and his wife Lucija were living in a temporary camp in Kyiv when it was attacked by more than eighty men in masks from the far-right Azov Druzhyna Militia carrying guns, baseball bats and sticks. Their documents and the little money they had was destroyed when the attackers set fire to their homes. “The Roma men here who have a passport have left for Slovakia and Hungary to work, mostly women have remained here in the settlement” says Lucija. “It is only my husband and some others without passports who have remained to protect us.”

In 2011, Hungary’s Fidesz government announced an amendment to the law on citizenship which allowed anyone with Hungarian ancestry and a knowledge of Hungarian language to become a citizen. Many Roma in the Hungarian speaking region of Zakarpattiya have taken advantage of their newfound EU citizenship and crossed the border to Hungary, Slovakia and beyond in search of work and safety for their families. Those who are not eligible are in the process of applying for a Ukrainian passport so they too can leave for the safety of the neighbouring EU nations. Though these countries are hardly safe havens for Roma, many in Zakarpattiya see it as a relative reprieve from the violence and day-to-day persecution they face in Ukraine.

Nadiya, 45, who is from Uzhgorod has seen many Roma in her area move away in search of work and an end to the persecution, including her own sister. “My sister decided to leave. She is in Slovakia now, near to Košice” she says from an armchair in her living room, surrounded by generations of her family who have lived in the same home for over a hundred years. “It is better for Roma there, she even has a job in a supermarket where she works in the warehouse. She could never get a job like that here in Ukraine.” 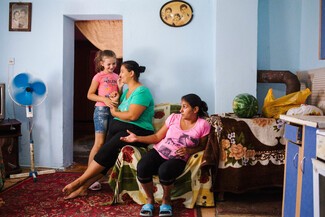 © Alex Sturrock 2018. Nadiya explains how the situation for Roma is deteriorating. She worries particularly about how children are being taught to hate from an early age.

Those not fortunate enough to have the necessary identity documents are forced to remain, stuck between the all-out warfare in the East and the growing anti-Roma violence in the Western regions. The situation for these people is made even direr by the daily hardships levied on them for being without papers.

Roma without papers don’t go to school. They don’t get good jobs. They have restricted access to housing and healthcare. Without a birth certificate a child cannot get an education certificate, and the children of undocumented parents cannot obtain birth certificates. So even if an undocumented Romani child is admitted to school, they will not receive a certificate, which means they will not be able to continue their education or get a job in later life. Without identity documents, Roma cannot officially work or register their own businesses. Even if they manage to overcome the societal discrimination which denies Romani people jobs, their statelessness means they must work off the books without the protection of labour rights. The European Roma Rights Centre estimates that only 15% of Roma in Ukraine are formally employed.

The poorest Roma, living in informal settlements cut off from water and electricity, often live in houses without any ownership or rental agreements. This puts them at risk of eviction. For those without identity documents it is impossible to enter into official housing agreements or dispute the eviction order. Stateless Roma also have no right to access social housing as they cannot prove their citizenship of Ukraine.

Under Ukrainian law, healthcare should be provided free of charge to every citizen. In reality, most Ukrainians have to pay for some medical services and medicines. For undocumented Roma who cannot establish Ukrainian citizenship, they must pay for healthcare - that is if they even get to be seen by a medical professional. Discrimination against Roma in healthcare is very common, and Roma have reported doctors refusing to treat them based on their ethnicity, and in some cases reported incidents where emergency services have refused to respond to calls from Roma. 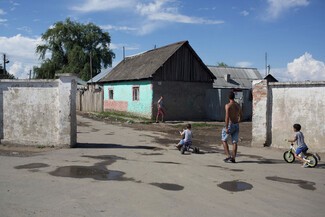 © Alex Sturrock 2018. The Roma-only settlement in Beregovo where many Roma have returned after a spate of far-right attacks. Separated from the rest of the town by a segregation wall, most of the homes have no access to running water or electricity and ar

Romani people in Ukraine lack the documentation to prove their nationality for many reasons. The dissolution of the USSR meant everyone became a Ukrainian citizen overnight, and many Roma living on the margins of society still have Soviet documents as they never obtained the Ukrainian replacements. Similarly, Roma whose documents are issued by the internationally unrecognised autonomous region of Transnistria are classed as stateless as no other nations will recognise their documents. Many Roma who were living in the areas affected by Russia’s annexation of Crimea, and the ensuing warfare, have lost their papers fleeing from war and are Internally Displaced Persons. The underlying cause of Romani statelessness however is not related to these external influences; it is a case of good old-fashioned, home grown discrimination.

Fear of discrimination from medical staff and of being made to pay for medical care means most Romani women give birth at home, decreasing the chance of the child being registered at birth. Authorities rarely bother to register the births of children born in poor, isolated Romani settlements. In fact, few state authorities seem to see the risk of statelessness amongst Roma as a major concern at all. There is a lack of procedures in place to determine statelessness in Ukraine and officials often put the blame on Roma for failing to register children. Police brutality against Roma and the use of threats of removing children from Romani families means that state registration of Romani children is something to be feared by many Roma.

When Roma manage to gather the necessary witnesses, get the supporting forms and documents in order, and go to the correct office to register for identity documents they are frequently turned away. “Either the official wants a bribe to process the application, or sometimes simply says ‘no, not today I have lots to do and that will take a long time, these Roma don’t understand how it works here’” said ERRC Lawyer Volodymyr Navrotskyy. “The passport official might say they have to come back another day - but this is the only day that they can get all of the witnesses together and take the time away from working. I have to fight them every step of the way to even have their application processed, and it is only because they are Roma that this happens.”

Currently there seems to be no urgency in Ukraine to tackle prejudice and discrimination, from which many of the problems of statelessness arise. In the short term, procedures to confirm Ukrainian citizenship need to be simplified, birth registration and documentation procedures must be made easily accessible to all. In the long term, the Ukrainian government should do some soul searching about how it has allowed rampant far-right nationalism to overspill into mainstream society, and in doing so, normalised extreme prejudice against Roma. Until a commitment is made to meaningfully engage with the underlying marginalisation and persecution of this ethnic minority, statelessness in Ukraine will continue to be an issue which plagues the most vulnerable Roma in the country who have nowhere else to seek refuge.

Main photo: © Serhiy Mazur 2018. On April 21st, members of the far-right groups C14 and the ‘Municipal Guard’ drove fifteen Romani families from their makeshift homes at Lysa Hora, in Kyiv. Carrying weapons, they chased down fleeing parents carrying small children, threw stones at them, and then set fire to the tents where the Roma had been living.