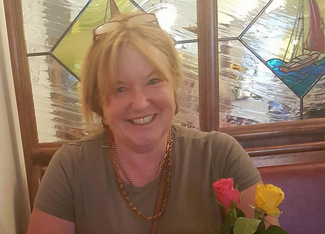 It was with great sadness that I learnt of the sudden passing of Aynlee Ryalla Duffy... Writes Siobhan Spencer.

Born into wagon time in the 1950’s Ryalla once stated:

“The period since then has seen a gradual, intentional and unrelenting erosion of rights of an entire way of life, aided and abetted by legislation and media bias.”

How true that statement is in the present climate. Ryalla and her family went through endless enforcements themselves from 1987 in Sussex when they had to leave their own land, she was well known in the southern counties (as well as the midlands).

When she was in Kent another old timer friend of us both (Tom Oldley) encouraged her to write poetry, she also had one written about her, (which was my mothers’ favourite that was framed with great pride.) “You have to laugh cos crying brings the rain( by Jimmy Storey) about  the never ending enforcements.

Ryalla was an excellent representative for her people and Romany rights, she was very knowledgeable of the New forest families and saw the comparisons of enforced camps and the final solution and she wrote a chapter on this history of the “compounds” in the Patrin book as part of the Patrin project with the monitoring group seeing the similarities of this particular aspect of Romany Gypsy history

Ryalla worked hard in Lincolnshire and was responsible for getting the much-needed work undertaken on the Summergangs Lane site, in Gainsborough, she was also the author of several books and heritage dvds, she was the subject of the classic Anglo Romani book ‘Born on the Straw’ by Dorothy Strange (1968), Ryalla had lived the life, lit many fires and told many stories.

In 2005 Ryalla was one of the founder members of the National Federation of Gypsy Liaison Groups and took part in police training, parliamentary meetings and conferences, one of which I have attached link below because more than anything despite the knocks, it illustrates her sense of humour and the truth in life and how I would like to remember her.

One of the last days we spent together was with Lord Bourne, for a heritage tribute as he laid a wreath at the grave of Private John Cunningham receiver of the Victoria Cross, in commemoration of the 100 years centenary of the Great War, a great day with her and as usual ended with great laughter

Recently I obtained a certificate of lawful use for Ryalla for land she had been resorting to for many, many years, it had its trials and tribulations, but it was passed, and we got through, this was her time now to relax and enjoy time with her family.

Bereaved are her four daughters, two sons and all of 13 grandchildren she is now in heaven to rest in peace with little Levi. The community will miss her hugely and I shall miss a very dear old friend.

Check out the video at the nine minutes slot where Ryalla talks of treatment at school and the only two positive things her father thought about going to school!