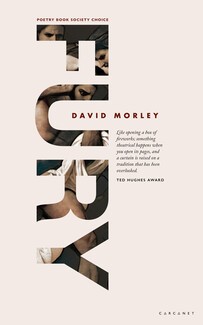 Appleby. Seamer. Wickham. In this year of panic and pandemic, the names of these locked down horse fairs carry extra significance for Gypsy, Roma and Traveller people. They remind us of the importance of the places where we can reconnect with our friends, families and traditions. At a time when we have been unable to gather, David Morley’s latest collection Fury offers a pathway, a putèka, to reconnect us to cultural identity, language, and the natural world.

The title poem, ‘Fury’ is a three-page dramatic monologue adapted from interviews with Tyson Fury, the champion British Gypsy boxer. Caught between giving himself a pep-talk in the mirror and being thrown on the ropes, Morley’s imagined Fury is held in a clinch with his biggest opponent: himself.

Parrying between his personal and professional identities, the poem explores Fury’s battle with mental health, in and beyond the ring:

With us, everyone is a tough guy.
They don’t talk like you and me
are talking. But we all cry instantly.
Look at me: 6 feet 9. If someone
said this to me in my family,
I would just cry. All of us would.

The poem raises significant questions: what does society believe they know and so expect of Gypsy, Roma and Traveller people? More importantly: what do we know and expect of ourselves? What do we as individuals aspire to?

Threaded throughout the collection are seven ‘Lyrebird’ poems which speak directly to Morley’s other professional life as an ecologist and naturalist. The choice of the world’s largest songbird is not accidental and it is prophetic that during lock down we’ve all been tuning into the natural world more, particularly the birds that are thriving in human absence. These ground dwelling Australian birds – a vulnerable species due to recent bush fires – help us to better understand the state of the world and the place of Gypsy, Roma and Traveller people within it.

Lyrebird courtship involves vivid displays. During peak mating season, the male birds shake their tail-feathers elaborately to attract females. A skilled mimic, the lyrebird repeats the calls made by other birds and even other animal species, such as the dingo. The skill extends to manmade sounds, from chainsaws to camera shutters to ringtones. During this competitive song and dance, the male lyrebird evokes the same movement, buzz and the energy we find in the boxing ring. To perform and survive, damage can be done in either display.

In this daring new collection, Morley holds a mirror up to the myriad of irresponsible ways that we as humans influence the natural world and how we treat one another. ‘When I Heard the Calling of Birds’, for instance, is a poem dedicated to another poet, Towfiq Bihani, who has been tortured and held for over seventeen years in Guantánamo Bay without a single charge:

When saffron finches dust-bathed in the detention yard,
I dreamed of home that day.

By observing the natural world, Morley offers us points for reflection upon the overlooked and the unheard. Here the lyrebird’s song and dance plays a pivotal role. Throughout the energy and clishmaclaver of courtship, the female lyrebird stays silent. In ‘Honour’ Morley retells the Roman poet Ovid’s Myrrha, a meditation on the crime of female genital mutilation which still occurs globally today. Morley further counters the silencing of women through the inclusion of poets such as Anna Akhmatova, Bronisława Wajs, Elizabeth Bishop and Marina Tsvetaeva.

Threaded with Romanes – as Morley’s poems often are – this is a celebration of the Roma tongue as well as the people and places gone by. Alongside the ‘Lyrebird’ poems, we find ‘The Caravan of Tarsish’ sequence. Each poem appears on the page like patrin, to follow and trace the evidence of our history and so, keep alive our families, friends and traditions. To read Fury is to tread a pilgrimage along the oldest putèka. To know these paths is to be compelled to walk them again, to feel the trembling pride for our ethnicity and to sing once more of home.

Fury was shortlisted for The Forward Prize for Best Collection. It is published by Carcanet on 27th August 2020. David Morley is an ecologist and naturalist by background. He studied Zoology at the University of Bristol and pursued research on acid rain. His awards for poetry include the Ted Hughes Award and a Cholmondeley Award. He was elected a Fellow of the Royal Society of Literature in 2018.David is a Professor of Creative Writing at Warwick University. His work in education has been awarded a National Teaching Fellowship.