”No Travellers”? No more, say lawyers who fought Wetherspoon and won 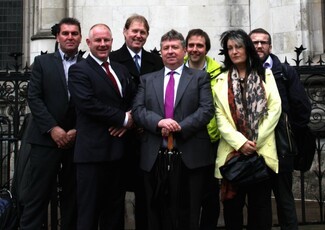 ”No Travellers”? No more, say lawyers who fought Wetherspoon and won

“The last bastion of acceptable racism has come crashing down.  It is dead.”  These are the clarion calls and headlines that have greeted the landmark legal victories of Romany Gypsies and Irish Travellers against the pub giant Wetherspoon, the largest pub chain in the UK with over 930 pubs.

We all know this has been going on for years: pubs, restaurants, hotels, clubs, taxis, bowling alleys and other businesses refusing entrance and service because you’re a Traveller or Gypsy, or even because you’re a friend of associate of Travellers.

“Sorry boys, can’t serve you today.” “Sorry ladies, no entry today I’m afraid.”   It happens so often that some Gypsy and Traveller people just accept it as part of their lot in life. “Don’t bother going in there, you won’t get a pint.”

But being refused service because of your race is not your lot in life, it is against the law. These recent court judgments show that at last, judges are starting to understand the grinding, everyday racism that Gypsies and Travellers have to put up with. Compensation is being awarded. We are the lawyers who won the case against Wetherspoon, and if you’ve experienced discrimination like this and can prove it, read on, because we can help YOU.

Make no mistake about it, the fight for equal treatment for Gypsies and Travellers has had an almighty boost from the seminal judgment of Judge Hand QC in the case of The Traveller Movement and others v JD Wetherspoon plc handed down on 18 May 2015 and from the following open admission of unlawful race discrimination made by Wetherspoon two weeks later in a second case brought by Irish Travellers in Cambridge.  It’s like buses – you wait for years for a good case to come along and suddenly there are two of them!

The facts are typical of cases where businesses discriminate against Travellers. In November 2011 the Traveller Movement held its annual conference in north London in a building next door to a Wetherspoon pub, “the Coronet”.  At the end of the conference delegates left the conference hall to go for a social drink next door. The first group to approach the pub included two Traveller women, a priest, a solicitor, and a policeman. Bouncers blocked their entrance with words to the effect of ‘you’re not coming in because you’re from the Traveller conference’. In court Traveller and Gypsy witnesses, with immense dignity, exposed gut wrenching raw emotions of what it is like to have shouldered years and years of blatant racism.

The judge got it.  He understood what it is all about. He said it all came down to “stereotypical assumptions”, to “racial stereotyping” by the manager of the pub.  The judge said that such attitudes could be boiled down to the “crude proposition that whenever Irish Travellers and English Gypsies go to public houses violent disorder is inevitable because that is how they behave”.  The judge found the pub to guilty of direct discrimination on the grounds of race and awarded each refused person  £3,000 compensation for their hurt to feelings for “being temporarily denied a social occasion in the most convenient venue”.  The pub chain has to payout damages totalling £24,000. It’s a wake-up call for service providers to stop their racist treatment of Travellers and Gypsies.

In the second case a group of Travellers went out in Cambridge on 27 February 2015 to celebrate the birth of a child and the birthdays of two members of the group.  Several of them approached the doors to the Tivoli pub to be told “No Travellers tonight”, although at first the bouncers and manager claimed there was a ”bookings only policy” – how often are lame excuses used to mask the real issue of unlawful race discrimination. On the back of the court win in the first case, Wetherspoon caved in and openly admitted unlawful direct discrimination, offering each person refused entrance £3,500 in compensation.

My law firm, Howe & Co in London, won the two Wetherspoon cases.  I was the solicitor barred at the doors of the Coronet pub in the first Wetherspoon case, as I had been at the conference because I am a member of the board of the Traveller Movement. Howe & Co is absolutely committed to stamping out this prejudice wherever it raises its ugly head.

We have set up a powerful campaign team in Howe & Co to fight these cases. We want to hear from anyone who has been the victim of blatant racism and help them win compensation and get formal apologies. We take on these cases on a no-win no-fee basis, or with the help of Legal Aid.

You can help.  Mobile phones are providing a revolution in proving discrimination claims.  If you are a victim of discriminatory behaviour immediately record the incident on your phone. Take a video of what is happening. Make a sound recording. Ask the person discriminating against you if it is because you are a Traveller?   Record the reasons given for the refusal of service.  If there are independent witnesses to the incident ask for their details.

The team of lawyers working on this campaign at Howe & Co includes our three partners – Martin Howe, Kieran O’Rourke and David Enright.   Together we can bring an end to this nasty soul-destroying prejudice and if service providers persist in their unlawful conduct we will make them pay in compensation, costs and loss of reputation.