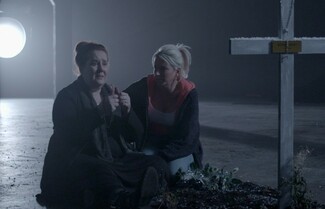 Special Preview of 'Never Going to Beat You'. A universal story about surviving domestic violence from an Irish Traveller perspective ' - showing Cinema Lumiere, London, this Saturday! Tickets are free. Details on how to book below:

The Traveller Movement and Brixton Reel are proud to present a special preview screening on 7th March of a very rare film made about the UK Gypsy and Traveller communities called ‘Never Going To Beat You’. It is on the powerful issue of domestic violence within the community, but this violence is a global phenomenon, with international reports stating it is experienced by between 20 to 50 percent of women in each country around the globe. In each culture the violence may be different but the devastating long-term effect on women’s mental and physical health is similar.

The film ‘Never Going To Beat You’ is based on true life experiences and tells the story of 17 year old Moira La Bas, who is about to sit her ‘A’ Levels when she meets Patrick, an older divorcee at a St Patrick’s Day dance. He woos her and wins her over, but Moira’s mother Evie foresees disaster and tries to rally the community to save her daughter. The feature has some gripping performances by new actors and women from the community itself.

The executive producers of the film are The Traveller Movement which is a national charity and campaigning organisation of Travellers and non-Travellers working together to build bridges to bring together the Gypsy, Roma and Traveller communities, service providers and policy makers.

Yvonne MacNamara of The Traveller Movement says: “An important area of our work is empowering Gypsy, Roma and Traveller women. ‘Never Going To Beat You’ was born from the idea of addressing the difficult issue of domestic abuse by using community theatre as a tool to open up discussion. Fortunately, our paths crossed with the late playwright Jennie Buckman (Giants Theatre), who with the help of eighteen Gypsy and Traveller women wrote the original play on which this film is based”.

‘Never Going To Beat You’ (15) will be previewed on 7th March, 2.00pm at Cinema Lumiere, Institut Francais, 17 Queensberry Place, London SW7 2DT. Tickets are free but must be pre-booked on Eventbrite  https://www.eventbrite.co.uk/e/never-going-to-beat-you-film-premiere-tickets-93107379679