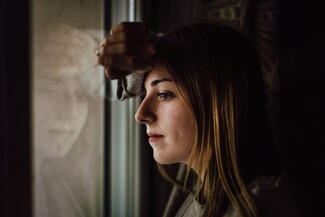 ‘You’re not alone. We believe you’

Megan was 14 and still in high school when she first dated Michael – who was in his 30s. He didn’t have a problem with Megan’s age and she felt cool dating an older man at first. But after a while she acted on her gut feeling that something didn’t feel right and ended things. They moved on, married other people and led separate lives… until 25 years later.

When Megan and Michael reconnected, the ‘love bombing’ started immediately and the relationship moved fast. They moved in together within three weeks.

The toxic behaviour slowly crept in. Jealousy. Broken trust. Alcohol abuse. Physical violence. Gaslighting. As Megan says, “The manipulation and mental abuse are horrendous. It’s like being swung around like a rag doll. One minute he wants to pick me up and play, the next minute I’m being emotionally thrown on the ground. It’s as though he gets off on hurting me.”

Part of that education includes highlighting the non-violent ways that harmful behaviour can occur within harmful relationships. This includes financial abuse, verbal abuse, sexual abuse (which can be violent or non-violent) and coercive control.

Gaslighting – a form of psychological manipulation that often happens within harmful relationships – is a tactic used by abusers to make you question your own sanity. The goal is to gain control so you feel unable to make your own decisions – including deciding to leave. Gaslighting can creep in gradually so you don’t notice what’s happening. And by then, you might struggle to break free.

“When I was being gaslighted, it was sometimes just easier to go along with what he told me was the truth - because the actual truth is something I’d have to do something about. I’d have to leave him or go to the police. I don’t think you ever totally believe the gaslighting, but you also don’t have the strength to think critically about what they’re saying to you.” – Megan.

You’re not alone. We believe you.

If you think you’re experiencing gaslighting in your relationship – or any other emotional or physical abuse - and you’re not sure what to do next, there is help available. You can call the Cheshire East Domestic Abuse Hub for a confidential chat on 0300 123 5101 if calling from Cheshire East, or the National Domestic Abuse Helpline (run by Refuge) freephone 24-hour helpline on 0808 2000 247 if calling from another area. You are NOT alone and you WILL be believed.

“It was such a relief that everybody I talked to – the police, My CWA, a national domestic abuse helpline I’d called – they all understood, they believed me. Nobody said it was my fault, that I should have done something different. It was a strange feeling. They got it, they wanted to help.” ­– Lucy, a domestic abuse survivor.

My CWA ­– Cheshire Without Abuse

My CWA (formerly known as Cheshire Without Abuse)

By My CWA for the Travellers’ Times