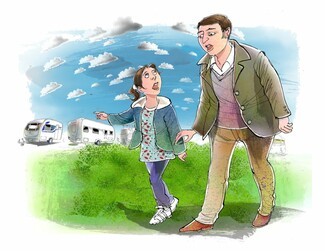 Molly and her Dad are walking to the local shop one sunny day. As they happen to pass a little lay-by Molly spots a handful of trailers. Curious, she turns to her Dad to help explain…

“Daddy, why are those caravans parked there?”

“Those Molly, are gypsies, we don’t like those people.”

“Why don’t we like them Daddy? And shouldn’t Gypsies be spelt with a capital G?”

“…well they are bad because they leave lots of mess. They don’t pay any tax either.”

“Do they always leave a mess Daddy or did you read that in poorly researched media outlets? Could this issue be addressed through negotiation, which might involve provision of skips and toilets?”

“Aren’t you a bit young to be using words like negotiation?”

“…and are you sure they don’t pay tax? Have you actually asked the people stopping there?”

“I told you Molly we don’t talk to such people.”

“But if we don’t actually talk with people then how do we know who they are or why they are here?”

“That is unimportant. The Council will move them on soon and it will be someone else’s problem. Actually yes, remind me to get onto the Council when we get home to speed things along.”

“But where will those Travellers go? Will those kids have to move school? I didn’t like moving school mid-term. It must be awful having to do that too often.”

“Like I said, not our problem. And look, if they didn’t want to get hassled they shouldn’t be living in a caravan in the first place.”

“What about our caravan. You know, the one parked in our drive which we take to Bognor every summer?”

“It just is. And even if they did like living in a caravan, why don’t they go live on those sites?”

“Do they like being called ‘they’ Daddy? And didn’t you write to object to a site just last year?”

“Yes but that one was going to be built in the wrong area.”

“It was near to our house.”

“Why is that a problem?”

“Yes but your explanation why is worse than the one about where babies came from!”

“No problem Daddy, I actually find McDonalds’ corporate model so distasteful I no longer wish to give them my custom. But that’s for another story…”

“Yes Molly and anyway I have no time for people who don’t try and sort out their own problems. It is not as if these Travellers have actually applied for permission to build a private site.”