Memories from a Romany Childhood P10 by Chris Smith 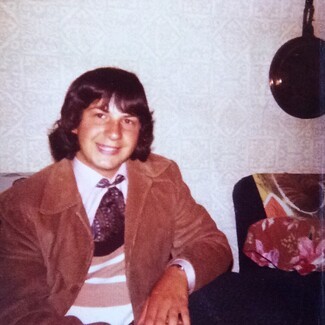 This week we are pleased to bring you the tenth story in the series ‘Memories from a Romany childhood'  by Romany Musician and previous TT manager, Chris Smith from Herefordshire.

1972 was a big year for me. It was the year that I graduated from Primary to Secondary School. My brother Len had attended Canon Frome School some years earlier, and was able to give me a heads up about what to expect, although it appeared that he had spent much of his time there working in the large walled-in garden, rather than in lessons.

Most of the country appeared to be on strike, including the miners and dockers. The miner's strike had been declared a national emergency. Anti- British riots were taking place all across Ireland, mainly because the British Army had shot thirteen unarmed nationalist civil rights marchers in Derry, Northern Ireland. Several British businesses had been burned to the ground along with the British Embassy. Civil unrest was in the air.

This was not what was worrying me though. The move to a new school occupied my thoughts a lot. I’m sure many Gorger children felt apprehensive also, but it was an especially difficult time for Traveller kids. At my second junior school bullying was firmly discouraged, and most of us Traveller children experienced little or no bullying because of our ethnicity. This changed dramatically when we moved to ‘big’ school.

Mam and Dad were keen that I should not be treated differently because of my ethnicity. They felt it was important that I had a proper school uniform, even though they could only be purchased from expensive outfitters in Ledbury. The blazers for Canon Frome were dark blue with a sky blue border edging. The top left pocket had an unusual image of a Griffin holding a man's hand, dripping with blood, sewn onto it.

Chris Smith at Canon Frome School 1973. Chris Smith is in the second row 5th from the left

I had done well in education at my first two schools and was considered by my teachers to be bright academically. So I was stunned when on the first day, which for some reason was a Wednesday, my cousin Michael and I were placed in the ‘slow learners’ class along with several other Travellers and a number of Gorger children.

Upon returning home that evening I declared that I wouldn’t be going again. Mam and Dad looked at each other knowingly and Mam asked me why. When I told her what had happened and that I’d spent most of the day digging in the garden, a look of anger and defiance crossed her features and she told me not to worry about it, she would sort it out.

Mr. Zeuner, the science teacher at Canon Frome lived just up the road from our tan in a large house that had once been a rectory. An interesting man, his dream was to replicate Hannibal’s expedition across the Alps using elephants, and he spent much of his time raising funds for this.

The next morning whilst walking past his house to get to the hop yards she was working in at the time, Mam called in to see the teacher and ask why I and my cousin had been placed in the ‘slow’ class considering our success at our previous school. Mr. Zeuner said he had no idea, and admitted that it seemed strange. He suggested that Mam speak directly with the headmaster, Mr. Godfrey, taking my previous school reports with her.

I did not attend for the remainder of the week. The following day during lunchtime, Mam was driven to the school by my brother. She insisted on seeing Mr. Godfrey and said she would wait until he was free. To this day I don’t know what was said in the meeting, only that when Michael and I returned to school the following week, we were intercepted by a teacher straight after assembly who told us that a mistake had been made and that we were to join the regular students in their classes.

Most of the other Travellers stayed in the ‘slow’ class, not because they were ‘slow’ but because some had little schooling prior to attending secondary school, usually because they had been on the road and had only recently settled in one place long enough to make it worthwhile going.

Mr. Zeuner kept an eye on me and my progress for the rest of the year, ensuring that he was always available should I need to speak with him. I made friends easily, but the major worry was whether to tell them about my ethnicity. My cousin Michael was tall, strong, and a good fighter, so the kids mainly left him to his own devices.

I wasn’t a good fighter and had to depend on my personality and wits to get through. Sometimes this worked, sometimes not, but mostly my time at Canon Frome was enjoyable. Many of the children came from poor backgrounds and often us Travellers were better dressed and had more money than them. This in itself could cause issues with jealousy.

The cool kids all smoked. Canon Frome school was a large converted country house, pretty much a mansion as far as I was concerned. The grounds were extensive and included large playing fields, an outdoor swimming pool, hard tennis courts, and even a lake, where we went canoeing, with an island in the middle. The island was the perfect spot to smoke on, covered in trees, and shielding us from being seen whilst smoking.

I wanted to be in the cool gang, but to do this would need to learn to smoke. At the age of thirteen, I chored a couple of cigarettes from me Mams pack one Saturday afternoon and found a quiet spot to light up. Mam smoked Park Drive cigarettes that were strong and didn’t even have a filter on. I took a long drag, inhaled, and promptly passed out.

You would think that this deterred me, but no. I woke up feeling woozy with my head spinning but determined to carry on. I soon became an expert smoker. Choring from me Mam was not on though and I knew this.

Due to its location in the heart of the countryside pretty much all of the pupils were bused into Canon Frome. I had to walk half a mile to catch the school bus that was driven by a woman called Mrs. Whitehead, who had no truck with any trouble on her vehicle and was not to be messed with.

The journey took us through Monkhide, which had a shop at the end of the village. Several kids, including me, would jump off the bus outside the shop and while it was turning around at the end of the road would rush into the shop, ostensibly to buy sweets, but in reality to buy cigarettes. Black Cat or Number 6 were our favorites.

This went on for quite a few months until one Sunday my brother and me Dad came home from their lunchtime drink at the Newtown pub on the crossroads at the edge of the village. Len waited until we were all sat down enjoying our roast dinner before disclosing that he had been told at the pub about me and others buying fags at Monkhide shop on the way to school.

My jaw dropped open with my forkful of food in the air, halfway to my mouth. I couldn’t believe he was telling on me! Me brother had a satisfied grin on his face as me Mam and Dad started on at me about smoking. Dad had given up several years earlier and was particularly vehement in his denouncement of smoking. Me Mam gave my brother a hard look saying “you had to bring this up at dinner time didn’t you”, knowing that Dad would soon be saying that she should quit also.

None of this made me give up smoking though, so strong was the youthful need to appear ‘cool’, and then inevitably the addiction to nicotine, that it would be a major health scare forty years later that finally made me stop. I still miss it.

Main photo: Chris Smith ready to go out mid-1970’s. Check out the cravat! (c) All photos courtesy of Chris Smith