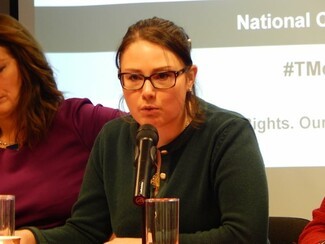 The Travellers Times and ACERT’s Lisa Smith speaks about her experience of education and discrimination at the 2016 Traveller Movement Annual Conference.

So why would anyone not want this, why would any parent not want this for their child? I wanted to put forward a community perspective on some of the challenges Gypsy and Traveller parents and children may experience in the education system.

A question that I would say nearly every Traveller parent asks themselves when their child is ready to start school is shall we be open about our ethnicity? Shall we tick the Gypsy/ Roma or Traveller of Irish Heritage ascription box on the school data sheet? What will be the best for the best? If I tick the box will it mean my child will have a better educational experience or will it mean opening them up to potential discrimination.

But why in 2016 should ticking a box to simply self-identify who you are be filled with so many considerations. For these reasons numbers data held on student population in schools will be a huge undercount.

I was asked to reflect on a challenge I faced in school and I suppose it was the lack of positive reflection of my own identity within the curriculum and a complete lack of understanding of my culture from school staff.

I like a quote by Jake Bowes who says “children learn more about the Vikings and fairies then they do about Gypsy and Travellers communities in school.”

A decision has to be made about what is considered to be valuable knowledge to be learnt and what is not and an education system cannot remain neutral as its say as much about what it includes as about what is excludes.

There is much research that shows a child is more receptive to learning when they can see there self-reflected in the learning environment. So why do we deny this to Romani and Traveller children, when it could be used a rich resource to improve learning and improve community relations?

When I was in school I only ever heard the word Gypsy when it was being given as a general insult to someone, ‘Gypo” or “Pikey” often going unchallenged and ignored. There does not appear to be much recognition that our communities make up ethnic groups in the English education system and that language like this should be treated as racial abuse.

I spoke to a 11-year-old boy recently he had just received a fixed term exclusion for hitting another child. I sat him down and asked him why, he said that he was repeatedly called a Gypo by boys in his class but nothing was being done about it so he felt like he had no other choice but to take matters into his own hands.

Again, I wanted to consider what impact this can have on the thought process of a child or teenager experiencing or being an onlooker to this.

There is a lack of positive and truthful resources about our communities within schools for both teachers and other pupils to use to improve understanding of who we are. This contributes to an acceptance of intolerance in our schools. The consequences of this have already been seen by our communities in its worst form, 15-year-old Irish Traveller Johnny Delaney was kicked to death in 2003 in a racially motivated attack by two school teenagers but this went virtually unreported when it should have been equivalent to the Stephen Lawrence enquiry in the black community.

Gypsy/Roma and Traveller pupils are named as a specific group that Ofsted should focus on in inspections and there is good practice happening in schools but more resources and support is needed. Lack of awareness and understanding can enforce a cycle of low teacher expectations and negative perceptions fuelled by a hostile media which in turn can trigger children to take on self-fulfilling prophecies.

My younger brother was told by a teacher that there was no point in teaching him because all he would ever do would be to tarmac drives. This was based on a perception of what this teacher thought he knew about Travellers. My older brother was bullied because of his ethnicity by other students for his first year of high school. But Many like him are left with two choices fight or flight he fought and was resistant taking on the persona of the stereotype that was reflected onto him. He used this as a coping mechanism to deflect bullying towards him that meant he could retain a safe space in school.

They were viewed as children that had attitudes oppositional to educational achievement.

Now what if you’re the parent of one of these children who is having issues in school and you did not receive a good education yourself?

What if you went through similar thought processes as a child?

How hard is it for you to combat the issues that are facing you?  Your trying your best but you have limited resources available, you have not much experience of how the education system works? You have no Traveller Education service to turn to for support or advice because funding has been cut. What can you do to ensure your child is safe? What can you do to ensure they continue with their education in school?

Why do many parents feel they must make this choice between the two?

Your children either stay in education or come out depending on your knowledge of the education system, your confidence to challenge and your ability to forget and entrust your child into this system.

Teachers and policy makers without a good understanding of the barriers to inclusion that many Gypsy/Roma and Traveller families might experience may perceive parent’s actions as a lack of interest in their child education or as a lack of aspiration for their child’s achievement.

It would be good practice for the government to implement this as compulsory knowledge in teacher training courses because without it how can schools effectively promote Equality of opportunity and fulfil their duty under the Equality Act (2010) for Gypsy/Roma and Traveller children.

I left high school believing I was not very good at most things. even though my parents were fully committed to my education and high aspirations for me. After I left school a unique position came up as an apprentice in a Traveller Education service working as a Teaching assistant.  I then decided to go back into education but if it were not for the opportunity made available through the Traveller Education Service I may never have wanted to return to the field of education. It has now put me in a privileged position where I have a voice to bring these issues to your attention.

I believe there must be a commitment to nurturing and developing our Romani and Traveller Youth and opportunities must be made available for our young people to reach their potential.

In education, The Department for Education monitors and publishes information about the progress and attainment of Gypsy/Roma and Traveller pupils that have self-identified. The data tells us that these children experience the most severe educational exclusion of any other group. In the form of lowest rates of educational achievement and attendance and highest rates of early school leaving and permeant exclusions. But even with all this data there continues to be no national inclusion strategy specifically for our children.

The role of Traveller Education services should not have been underestimated by the government, they advocated for families taking a key role in challenging unlawful actions by academies and schools and supporting access and continuity of education. Severe cuts of these services across the county have left us in a crisis and nobody seems to care, about the increasing number of children dropping out of the school system completely or struggling to gain access to it all. It has created massive safeguarding issues of children that have disappeared off the radar completely but most Local Authorities have barely batted an eye lid and The Department for Education appears to not even acknowledge that there is a problem.

The government could have safeguarded these services in 2012 but instead took a mainstreaming approach to raising educational achievement. This is still believed to “tackle engrained inequalities and promote fairness for Gypsy and Traveller communities.”

However how can a ‘mainstreaming’ approach that fails to recognize ‘ethnic need’, deal with a social reality where Gypsy and Traveller children are more likely to experience early death, poor childhood development and are over-represented as living in poverty

The governments approach to mainstreaming rests on a view that fairness means treating people the same. But treating everyone the same is not the same as providing equal opportunities and our communities need greater support to access opportunities given the unique position of anti-Gypsyism that we experience in society.

The problem is that we need a political will for real change and what this come down to is that there don’t appear to be any votes to be gained by making education truly accessible to Gypsy and Travellers.

The long awaited and hugely welcome enquiry by the Women and Equalities Committee announced on the 24th November that they will look at the impact of the governments approach to 'tackling inequalities' outlined in 2012  by the ministerial working group 28 commitments for tackling inequalities faced by Gypsies and Travellers (PDF 208 KB).

Take a look and ask yourself what progress has been made in achieving these commitments in areas of education, health, employment and accommodation.

What has been the impact on your life?

What has been the impact on improving outcomes for Gypsy and Travellers in England since 2012?

Submit your views to: